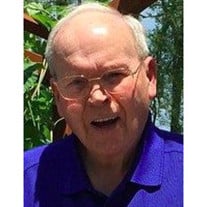 My father, Alex McKnight (1928-2019), wore many shoes and not just the leather kind. He did have in his closet some white bucks and some blue suede shoes and some chukka boots but seemed to like his wing tips the most. Many shoes, however, also... View Obituary & Service Information

The family of Alex McKnight created this Life Tributes page to make it easy to share your memories.