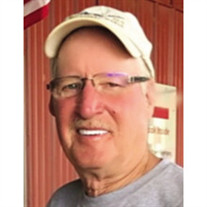 Dave Foust was born January 2, 1948, to Louis and Euna (Combs) Foust in Freeport, IL. Dave left this Earth on November 26, 2019 following a short battle with cancer. He grew up in Shannon and graduated as a Shannon Eagle. In school he enjoyed playing drums in the band, playing sports, and playing pranks. He continued his education and graduated from Highland Community College. During these years, Dave worked for various local farmers. He spent most of this time helping Marlin Bicker, who later would become his father-in-law. In November of 1969, he married Alene Julius and they had two sons - David (Oscar Cruz Betancourt) Foust and Justin (Crissy Davis and granddaughter Paige) Foust. In September 1982, Dave married Deb Bicker and they had one daughter KaLena Foust. They lived in the rural Pearl City area. Dave worked for Kelly Springfield, Avco Finance, Schwan's Ice Cream, and for the last 35 years he retired from FS Grain where he was a Plant Manager in Shannon. Following retirement, he continued his love of farming by working for Miller Farms of Shannon. While there he enjoyed driving tractor and truck, working with a great crew of men, and especially "Patty's Suppers". Dave valued being involved in his community. He was a firefighter and chief of the department for numerous years. He was a member of Bethel United Methodist Church in Shannon. He spent time leading the high school youth group and taking them on mission trips. He played the guitar in the Praise Band. Dave loved the children and youth of the church. They held a special place in his heart. Preceding him in death are his parents, Louis and Euna Foust, father-in-law, Marlin Bicker and brother-in-law, Craig Bicker. Surviving Dave are his wife, three children, one grandchild, two brothers - Dan (Jan) Foust and Bill (Bonnie) Foust and Mother-in-law - DeLores Bicker. He has numerous nieces and nephews and great nieces and nephews that all meant the world to him. This was especially true when he was able to play games and pull tricks on them. In honor of his life, visitation will be Saturday, November 30th from 3:00 - 7:00 at Bethel United Methodist Church in Shannon. A Memorial Service will be Sunday, December 1st at 2:00 with a visitation starting at 1:00 at Bethel United Methodist Church. In lieu of flowers, a memorial is established for Bethel United Methodist Church and the Shannon Lanark Food Pantry.

Dave Foust was born January 2, 1948, to Louis and Euna (Combs) Foust in Freeport, IL. Dave left this Earth on November 26, 2019 following a short battle with cancer. He grew up in Shannon and graduated as a Shannon Eagle. In school he enjoyed... View Obituary & Service Information

The family of Dave Foust created this Life Tributes page to make it easy to share your memories.

Send flowers to the Foust family.