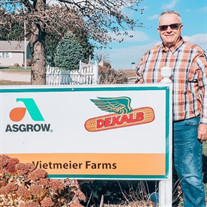 David Lynn Vietmeier, 78, of Forreston, passed away, Thursday September 16, 2021, at FHN Memorial Hospital, with family by his side. David was born on August 4, 1943, in Freeport, the son of Lorence and Mildred (DeVries) Vietmeier. He graduated from Forreston High School. David married his High School sweetheart, Shirley Kilker, on August 18, 1962. David had a lifelong love of farming, he also worked at the Forreston Ready Mix for many years. He was known for his outgoing personality and his strong faith in his savior, Jesus Christ. He attended North Grove Evangelical Church in Forreston for many years. His life can best be described by Provers 20:7, which says, “The just man walks in his integrity; his children are blessed after him.” Surviving is wife, Shirley Vietmeier of Forreston; three daughters, Stephanie (Ken) Schubert of Dakota, Jodi (Neal) Langill of Forreston, and Jacki (Kurt) Kaiser of Forreston; three brothers, Robert (Barbara) Vietmeier of Mt. Carroll, Gerald (Gwen) Vietmeier of Rockford, and Dennis (Barbara) Vietmeier of Pinegree, IL. David was blessed with eight grandchildren, (Jenna, Kyle, Lindy, Cassidy, Emily, Grace, Aaliyah, and Ella) and six great-grandchildren (Landon, William, Lincoln, Lilah, Miles, and another great-granddaughter due in December 2021). David was preceded in death by his parents. Funeral services will be noon Friday September 24, 2021, at North Grove Evangelical Church, Forreston. Pastor Tim Hotchkiss will officiate. Visitation will be 9:00 a.m. until the time of service at the Church. A memorial has been established in David’s memory. Please sign his guestbook and share a remembrance in his memory.

David Lynn Vietmeier, 78, of Forreston, passed away, Thursday September 16, 2021, at FHN Memorial Hospital, with family by his side. David was born on August 4, 1943, in Freeport, the son of Lorence and Mildred (DeVries) Vietmeier. He graduated... View Obituary & Service Information

The family of David Lynn Vietmeier created this Life Tributes page to make it easy to share your memories.

Send flowers to the Vietmeier family.