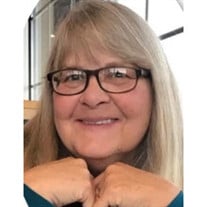 Donna Lou Stewart Woodley, 68, passed into the arms of her Savior on Sunday July 26, 2020 after a brave and courageous battle with Kidney Cancer at her home in Freeport. Donna was born October 30, 1951 in Champaign, Illinois, the daughter of Frederick and Dorothy (Baal) Stewart Sr. Donna was the 4th of 7 children. Donna married the love of her life, Wayne E. Woodley on March 31, 1973. She is the beloved mother of two and the cherished grandmother to four devoted grandchildren. She was a faithful sister and privileged aunt to many nieces and nephews, and honored friend to many. Family meant everything to her. It was her personal mission to cheer for the underdog, speak up for the less than, and love all who she felt needed a mothering touch. Donna graduated from Freeport High School in 1969 and Lamola School of Beauty in 1970. She spent 35 years as a secretary at Honeywell, as well as time working extra jobs throughout the years at Duncan's Gas Station, EconoFoods Deli, and Swiss Colony. If you asked her, her favorite role was always mother and grandmother. Donna was a lifelong member of the Church of Christ, Freeport. She had a strong and quiet faith which guided her every decision. It was this faithfulness that enabled her to love people so well. She was selfless and intentional in the way she met people right where they were, accepted them without judgment, and encouraged them with fervor. Donna was also an avid birdwatcher, nature photographer and self-proclaimed selfie extraordinaire. Her favorite past-time was taking photos of every sunrise and sunset, sharing her meadow photos and going on her Tuesday Travels and Adventure days with the people she loved most. Surviving are her husband, of 47 years, Wayne Woodley of Freeport; children, Dawn (Tom) Boyer of Ridott and Brian (Jasmina) Woodley of Loves Park; grandchildren, Haleigh, Tanner and Lauren Boyer, and Eyden Woodley; siblings, Frederick (Barb) Stewart of Lena, Linda (David) VanMatre of Freeport, Kenny (Dawn) Stewart of Florida, and Marlene Stewart of Cedarville; brothers-in-law, Gary Woodley of Dakota and Darrel (Rhona) Woodley of Elroy; also surviving are many beloved nieces and nephews. Donna was preceded in death by her parents, one sister, two brothers, mother-in-law, and grandparents. Funeral services will be 11:00 a.m. Wednesday July 29, 2020 at Church of Christ, Freeport. Jeff White will officiate. Visitation will be 9:00 a.m. until the time of service. In lieu of flowers a memorial has been established. Please sign Donna's guestbook and share a memory at www.burketubbs.com

Donna Lou Stewart Woodley, 68, passed into the arms of her Savior on Sunday July 26, 2020 after a brave and courageous battle with Kidney Cancer at her home in Freeport. Donna was born October 30, 1951 in Champaign, Illinois, the daughter of... View Obituary & Service Information

The family of Donna Lou Stewart Woodley created this Life Tributes page to make it easy to share your memories.

Donna Lou Stewart Woodley, 68, passed into the arms of her Savior...

Send flowers to the Woodley family.