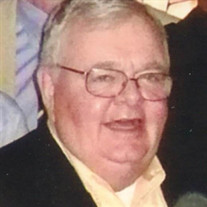 Frank “Ned” Everett Furst died peacefully at home in Freeport, Illinois on Sunday, October 24, 2021. Born on May 1, 1939, Ned graduated in 1956 from Freeport High School where he was a member of the golf team and active in theater. He was proud to have been directed by Jeanette Lloyd. He continued his education at Yale University and received a B.A in 1960 in American Studies. Ned’s deep love of history would sustain him throughout his life. While attending summer school at the University of Wisconsin, Ned began dating Harriet “Hapsie” Eaton, the daughter of his parents’ friends. Ned and Hapsie married in Freeport on September 24, 1960. Ned continued his education at the University of Michigan and received his MBA in 1963. While in Ann Arbor, Ned and Hapsie welcomed their daughters Martha and Susan. Ned earned his CPA and worked for Arthur Andersen in Detroit. In 1966, Ned and Hapsie returned to Freeport where he followed his father’s lead and began his career with Furst-McNess Company, which was co-founded by his grandfather. Soon thereafter, his third daughter, Betsy, was born in Freeport. Ned’s career at McNess paralleled an active civic life in Freeport. He became President and CEO, and eventually Chairman of the Board of Directors, at McNess, and he concluded his tenure as Chairman Emeritus. He loved building the company and valued working with his colleagues. Ned also served on the Illinois Manufacturers Board, the American Feed Industry Association Board, and the Chicago Chapter of YPO (Young Presidents Organization). From a civic perspective, Ned remained active in many local organizations and served on the Stephenson County Board, the Freeport School District #145 Board (as the third generation Furst to do so), the (old) State Bank Board, the Freeport Hospital Board, and the Lincoln-Douglas Society Board, among others. Ned’s true joy in life was family – Hapsie; his three daughters; his son-in-law, Francis; his parents, Jeanne and Charlie; his sisters, Janet (John) and Allison; and his dog, Dewi. Following Hapsie’s death in 2012, Ned found romance again with JoAnn Savoy of Madison, Wisconsin. He was blessed with many good and true friends over the course of his life. Ned was an avid traveler, and he enjoyed playing golf and bridge. Later in life, he enjoyed watching golf, Cubs baseball, football, Jeopardy!, Wheel of Fortune, and anything on the Food Network. Visitation will be from 4:00 p.m. to 7:00 p.m. on Thursday, October 28, 2021, at Burke-Tubbs Funeral Home in Freeport, Illinois. A funeral service will be held at 11:00 a.m. on Friday, October 29, 2021, at Grace Episcopal Church in Freeport, Illinois. Face masks are required for both the visitation and funeral. The family has requested consideration of memorial contributions to the Boys & Girls Club of Freeport & Stephenson County, the Freeport Art Museum, and the Family YMCA of Northwest Illinois in Ned’s name, in lieu of flowers.

The family of Frank "Ned" Furst created this Life Tributes page to make it easy to share your memories.

Send flowers to the Furst family.