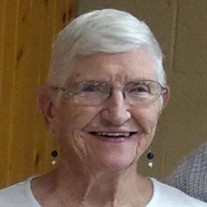 Jane Marie Sughroue Banks of Dakota passed away peacefully Tuesday September 14, 2021 at the age of 85 at home with her family. Jane was born Sept 12, 1936 at home on the farm outside of Ridott, the daughter of John and Emma Schopf Sughroue. Jane was happily married to Bruce William Banks for 64 years. Together they had 6 children. Jane and Bruce were married in 1957, then moved to Mexico City Mexico where Bruce went to school on the GI Bill. After living there for over a year, they moved back to Illinois for a few years, before moving to Texas for three years, back to Illinois briefly, then on to Michigan for a year. They settled in Dakota in 1967 and were there ever since. Jane worked at Micro Switch for many years, then joined Bruce at the Credit Bureau of Freeport where they worked together until they retired. Jane loved her family and friends. Jane loved to make a real brandy old-fashion, with all the trimmings, for anyone that came to visit. Jane and Bruce saw the country in their RV, enjoyed many visits to their cabin in Conover Wisconsin, and traveled the world. Jane was an avid bowler and once bowled a 300 game. She loved to golf, fish, snowmobile, play cards, read, crochet, and more. Jane was a die-hard Bears fan and loved watching Tiger Woods play golf. Over the past several years, Jane and Bruce enjoyed many ‘Thirsty Thursdays’ at the RCT playing the machines. Jane was the last of the Sughroues, preceded in death by her parents and seven siblings. Jane was also preceded in death by her youngest daughter, Shaney. Doug (Pam) Banks is the oldest of Jane’s surviving children, followed by Cerena (Shawna) Banks, Laura (Todd) Wise, Valerie (Wayne) Schwarzkopf, and Shelly (Frank) Chaloupka. Jane had 14 grandchildren, 20 great-grandchildren, and countless nieces and nephews. Visitation will be from 2:00 to 4:00 on Saturday September 18 at Burke Tubbs Funeral Home in Freeport. In lieu of flowers, donations can be made in Jane’s name to St. Jude Children’s Research Hospital at stjude.org.

Jane Marie Sughroue Banks of Dakota passed away peacefully Tuesday September 14, 2021 at the age of 85 at home with her family. Jane was born Sept 12, 1936 at home on the farm outside of Ridott, the daughter of John and Emma Schopf Sughroue.... View Obituary & Service Information

The family of Jane Marie (Sughroue) Banks created this Life Tributes page to make it easy to share your memories.