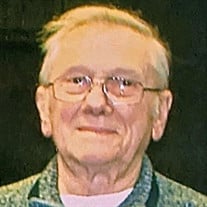 Marvin Ruthe, 92, of Freeport died peacefully of a broken heart to join his beloved wife in heaven on a bright Sunday morning, January 9th, 2022 at home surrounded by his family. Their love was too strong to keep them apart. Born March 27th, 1929, in Stephenson County, IL, the son of Frederick and Rena (Meiners) Ruthe. Marvin married the love of his life, Florence Buss on December 21st, 1950, in Shannon Illinois. Marv was a lifelong truck driver. He started driving straight truck when he was only 14. He worked for Forreston Grain & Feed Mill prior to going into the Army. He was drafted into the Army on March 15th, 1951 only 3 months after getting married. He trained for the Korean War at Fort Custer, Michigan, which served as an induction center for draftees. Marv was then deployed to Germany. He drove artillery, ammunition and fuel trucks through Germany, Australia, Switzerland and Italy, supporting the war effort. He recently told the story how one area didn’t allow military trucks to drive on their roads over the weekend. So wherever they were driving at 5 o’clock Friday, they had to pull the trucks off the road and camp right there until Monday morning. Marv was honorably discharged on February 17th, 1953 and returned home to Forreston. He resumed his job driving for Forreston Feed Mill. Later, he became the delivery driver for Freeport Plumbing Supply, where he worked until his retirement. After retirement, he drove the VA bus to Madison for the next 20 years. Surviving are his three sons, Stephen Ruthe, David Ruthe & Dennis (Laurie) Ruthe; brothers Lloyd (Janice) Ruthe of Oregon, IL, Dale Ruthe of Baileyville, IL; four grandchildren, Heather (Bryan) Schweigert, Nicholas Ruthe, Jen (Reid) Mazanek of Las Vegas NV, & Jordan Ruthe; great grandchildren Brooks Mazanek, Christian (Kylah) Jacobs, Nathan (Sydney) Witt, Natanna Jacobs, Collin Ruthe, Brandon Ruthe; great-great grandchildren Kenadie, Spencer, EmmaLee, Nataley. He was preceded in death recently by his beloved wife Florence on December 11th, 2021; by his parents; his brother Calvin and his sisters Esther Hagemann and Lucille Ruthe. Funeral services will be at 11:00 a.m. Thursday, January 13th, 2022, at Burke-Tubbs Funeral home in Freeport. Visitation will be held from 10:00 a.m. until time of service. Burial will be at Chapel Hill Memorial Gardens.

Marvin Ruthe, 92, of Freeport died peacefully of a broken heart to join his beloved wife in heaven on a bright Sunday morning, January 9th, 2022 at home surrounded by his family. Their love was too strong to keep them apart. Born March 27th,... View Obituary & Service Information

The family of Marvin Ruthe created this Life Tributes page to make it easy to share your memories.

Marvin Ruthe, 92, of Freeport died peacefully of a broken heart...

Send flowers to the Ruthe family.