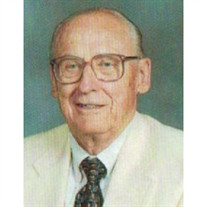 Ozzie Stambaugh, age 94, of Freeport, passed away peacefully Thursday, December 13, 2018 at Liberty Village. He was born on April 30, 1924 in Richland Center, Wisconsin, the son of Charles and Ella (Jesse) Stambaugh. He graduated from Richland Center High School. He was a veteran of the U.S. Army and served his country during World War II in the Pacific Theater where he was stationed as a Military Policeman in China. Ozzie married Mary Lou Krogull on December 27, 1950 at St. Thomas Aquinas Church in Freeport. He had his own appliance repair business in Freeport from 1959-1967. After that he started his 30 year career with Sears as an appliance technician in the area. Ozzie was a member of St. Thomas Aquinas Church and part of many committees throughout his 68 years as a parishioner. He was also a proud member of Golden K Kiwanis, Elks Lodge 617, Veterans of Foreign Wars, AmVets, Showtime Parent Group, and The Eagles Club. In his retirement, he enjoyed volunteering at the Freeport Memorial Hospital and traveling with his wife and daughter. In the past 10 years, he found enjoyment in posting his thoughts and photos on Facebook, most notably, "The World According to Ozzie". He was a proud patriot and loved his country. He was happy to celebrate the Chicago Cubs' World Series win in 2016- something he waited his entire life for. He is survived by his daughter Lou Ann (Ronald) Hayes of Freeport. Ozzie was preceded in death by his wife Mary Lou Stambaugh, his parents Charles and Ella Stambaugh, his 5 siblings: Gerald, Jessie, Frederick, Elizabeth and Louise. Funeral Mass will be 10:30 a.m. Wednesday December 19, 2018 at St. Thomas Aquinas Catholic Church. A rosary service will be held 4:00 p.m. on Tuesday December 18, 2018 at Burke Tubbs Funeral Home, with a visitation following until 7:00 p.m. also at Burke Tubbs. There will also be a visitation Wednesday 9:30 a.m. until the time of service at St. Thomas. Burial will be in Calvary Cemetery. A Memorial Fund has been set up in Ozzie's memory for the benefit of Disabled Veterans, The Salvation Army and the Friends Forever Humane Society. Please sign Ozzie's guestbook at www.burketubbs.com

Ozzie Stambaugh, age 94, of Freeport, passed away peacefully Thursday, December 13, 2018 at Liberty Village. He was born on April 30, 1924 in Richland Center, Wisconsin, the son of Charles and Ella (Jesse) Stambaugh. He graduated from Richland... View Obituary & Service Information

The family of Oscar "Ozzie" Stambaugh created this Life Tributes page to make it easy to share your memories.

Send flowers to the Stambaugh family.