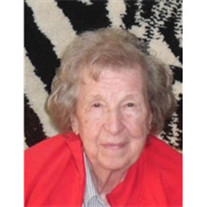 Barbara B. McKnight, 96, of Freeport, Illinois passed away at the Presence St. Joseph Center on Sunday, December 13, 2020. She was born January 17, 1924 in Provo, Utah to Merl William Brown and Emma Elmira (Smith) Brown. She married James Wallace McKnight on October 10, 1952 in Mesa, Arizona. She attended the Agricultural College as an Art major in Logan, Utah but moved on to Los Angeles, California after 2 years. In Los Angeles she worked in the Downtown Bullocks Wilshire department store as a personal buyer in great demand because of her artistic flair and congeniality with affluent customers. She was active in the Church of Jesus Christ of Latter-day Saints throughout her life. She taught boys in the Church's Blazer class for many years. She desired 'her boys' to gain their 1st class rank in scouting by the time they left Primary. In most cases 'her boys' went on in the scouting program to become Eagle scouts. Her collection of National Geographics was legendary, using them for visual resources as she taught Cultural refinement lessons about countries all over the world. She was a camping and backpacking enthusiast as the family camped and hiked all over Southern California. She was known for her unfailing happy outlook. She will be sorely missed. She lived for 12 years in Woodland Hills, California, 34 years in Calimesa, California, a year in San Jacinto, California and the last 11 years of her life in Freeport, Illinois. She is survived by one sister, Bonnie Young, of Logan, Utah, a daughter, Kimella McKnight Walker of Freeport, IL (George), a son, Joseph Merl McKnight of Santee, California, a daughter-in-law, Kay Mitchell McKnight of Ramona, California, 10 grandchildren, Michaela Stephens (Devon-Deceased) of Gilbert, AZ, Cameron (Teresa) Walker of Overland Park, Kansas, Spencer Walker (Julie) of Cedar Falls, Iowa, Stuart Walker (Sarah) of Urbana, IL, Tennille Walker Jones (Scott) of Sandy, Utah, Nelson Walker (Kelsee) of Manhattan, Kansas, Trent Walker (Jessica) of South Jordan, Utah, Mitch McKnight (Stephanie) of Ramona, California, Will McKnight (Pleshae) of Boy's Town, Nebraska, and Doug McKnight (Stephanie), San Jacinto, California, 16 great grandchildren and numerous nieces, nephews and grand nieces and nephews. She was preceded in death by her husband, brothers, Merl and Lionel and a sister Aldyth. Because of friends and family members scattered throughout Utah, California, Washington, Kansas, Iowa and Arizona, as well as in Freeport, there will be a virtual celebration of her life in 2021 via zoom. She will be buried in the Riverside National Cemetery in Riverside, California with her husband who was a veteran of WW2.

Barbara B. McKnight, 96, of Freeport, Illinois passed away at the Presence St. Joseph Center on Sunday, December 13, 2020. She was born January 17, 1924 in Provo, Utah to Merl William Brown and Emma Elmira (Smith) Brown. She married James... View Obituary & Service Information

The family of Barbara B. McKnight created this Life Tributes page to make it easy to share your memories.

Barbara B. McKnight, 96, of Freeport, Illinois passed away at...