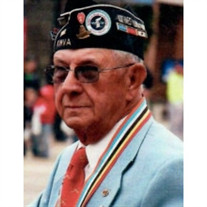 Clyde G. Fruth, 88, of Freeport died Wednesday March 11, 2020 at Monroe Clinic Hospice Home. He was born August 10, 1931 in Washington County, IL to Andrew Walter and Olga (Petri) Fruth. He married Darlene Dintelman on February 6, 1954 in Marissa, IL. She passed away on January 31, 2009. Clyde retired from Federal Kemper Insurance Company, where he was a sales manager. During Clyde's life he enjoyed fishing, hunting, camping, bowling, golfing, gardening, and loved watching the St. Louis Cardinals. Clyde served his country as a forward observer for the U.S. Army during the Korean Conflict. He founded and was past President of the Northwest Illinois Chapter of the Korean War Veterans. He was also President of the All Veterans Memorial Park, serving as Financial Advisor in charge of major fundraiser for the park. Surviving are his children Terry (Jane) Fruth and Debbie Fruth both of Freeport; five grandchildren, Nichole (Rob) Brinkmeier of Merrimac, WI, Kristy Fruth of Freeport, Andy (Mallory) Fruth of Davis Junction, IL, Alex Fruth of St. Louis, MO, and Lauren Fruth of Freeport, IL; six great-grandchildren, Madison and Carson Brinkmeier, Grace and Elijah Schrader, Paxton and Presley Fruth; also brother Calvin Fruth; sister-in-law Lorraine Dintelman; many nieces and nephews; and special friends Melinda Fruth and Frank Serfoss. The family would like to thank Dr. Muise, nurse Rita, Dr. Stewart, the staff at Davita Dialysis and the staff at Monroe Clinic Hospice Home for their care. Funeral services will be 11:00 A.M. Saturday March 14, 2020 at Burke-Tubbs Funeral Home with a visitation from 8:30 A.M. until the time of service. Burial will be in Chapel Hill Memorial Gardens. In lieu of flowers a memorial has been established in his memory. Condolences may be sent to 126 Knollwood Drive Freeport, IL 61032.

The family of Clyde G. Fruth created this Life Tributes page to make it easy to share your memories.

Send flowers to the Fruth family.