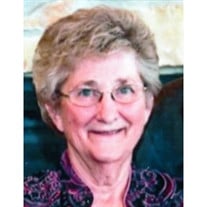 Evelyn A. Bouray, 82 of Freeport Illinois, was taken home on Sept 9, 2020. God saw her getting tired and a cure was not to be. So he put his arms around her and whispered "Come to Me". A golden heart stopped beating hard working hands placed at rest. God broke our hearts to prove to us He only takes the best. Evelyn was born in Stephenson County on the Robieson Homestead in Lena Illinois on April 20, 1938. Evelyn was the daughter of Lewis & Ida (Grabow) Robieson. On April 18, 1959 she married Robert E. Bouray. For many years Evelyn was employed by the Freeport School District she worked as a Secretary for Blackhawk and Harlem schools later transitioning to the Human Resource Department and retiring from the District in 1997. Cooking and baking was not just a hobby for Evelyn. She held a certification with the State o f Illinois as a Manager in Food Service to prepare and serve food for her church community. Over the last 40 years Evelyn was very active in the organization of church activities and was very grateful for the many activities and support from all of the hard working committees. These activities included; the finance council, church bazaars, candy booths, card parties, bake sales, pancake breakfasts, spaghetti dinners, funeral lunches, bingo, prayer chain organizer, money counter, ladies guild & treasurer. She combined efforts with Father Barr and his famous dinners with her famous pies to help reduce debt. She loved her kitchen with many exciting food dishes prepared and her pie baking was enjoyed by many. Her motto was. "A messy cook is a good cook" Evelyn took off her Chef hat and put on her construction hat to coordinate the repairs in the church and redesigned the beautiful kitchen in the school so she could help serve the people of the church in the Hall. She also served as a Girls Scout Leader, Cub Scout Leader and 4-H Co-Leader, and was a member of the Eagles Auxiliary. Surviving are her husband Robert and 4 children: Terry (Marty Stockton) Bouray of Rockton IL, Marcia (Scott Harris) Bouray of Cedarville IL, Karen Loring and Jeffrey (Cynthia) Bouray of Thomson, IL, 6 grandchildren, Justin Loring, of Huntley IL, Erica Loring of Carol Stream IL , Ryan (Jennica) Bouray of Brookfield , IL. Macie (Jared) Wise of Tennessee, Zachary Harris, Colorado and Lindsey (Zach) Baker of Orangeville., 5 Great Grandchildren: Rowan, Quinn and Jade Baker, Steele Harris and Felicity Wise. Also, surviving are 6 brothers Dwayne, Nelson, Donnie, Laverne, Rolland and Robert Robieson and 2 sisters Marion Long and Carol Niemann. Also many cousins, nieces and nephews. Preceded in death by 2 brothers, Lawrence and Willard Robieson. Funeral Mass will be 10:30 a.m. Saturday September 12, 2020 at St. Mary's Catholic Church. Rosary will be 2:30 p.m. Friday September 11, 2020 at Burke Tubbs Funeral Home, following the Rosary a visitation will be held from 3:00 p.m. - 7:00 p.m. There will also be a visitation Saturday at St. Mary's from 9:30 a.m. until the time of service. Burial will be in Calvary Cemetery. A luncheon at Freeport Eagles Club will be held after the burial. A memorial has been established for St. Mary Church and the American Cancer Society in Evelyn's memory. Please sign her guestbook and share a remembrance at www.burketubbs.com In our hearts she holds a place no one else will ever fill.

Evelyn A. Bouray, 82 of Freeport Illinois, was taken home on Sept 9, 2020. God saw her getting tired and a cure was not to be. So he put his arms around her and whispered "Come to Me". A golden heart stopped beating hard working hands placed... View Obituary & Service Information

The family of Evelyn A. Bouray created this Life Tributes page to make it easy to share your memories.

Evelyn A. Bouray, 82 of Freeport Illinois, was taken home on...

Send flowers to the Bouray family.