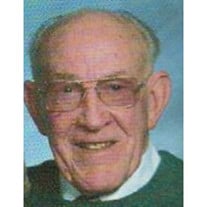 Glenn O. Coomber, 88, of Freeport, died Sunday December 14, 2014 at Presence St. Joseph Center in Freeport. He was born June 29, 1926 in Lena, IL, to Jesse and Mildred (Burke) Coomber. He married Loraine Eastman August 31, 1946; in Freeport, Illinois. She died May 16, 2003. Glenn married Eunice Stake May 29, 2004. Glen worked at Henney Motor Co., then 15 years at Fairbanks & Morse, followed with 23 years at Erickson Dental Lab in Freeport. Glenn retired in May of 1984. He was an active member of Immanuel Lutheran Church, Freeport, having served as usher for many years and on the counting committee. He was a veteran of the U.S. Army serving in Korea from January 1952 to September 1953, and then in the Army reserves for eight years. He enjoyed fishing, traveling, playing cards, and visiting with friends. Glenn is survived by his wife Eunice Coomber of Freeport, IL; five stepchildren Coleen (Dennis) Janssen, Marsha (Butch) Lott, Debra (Kerry) Dinges, Kevin (Jenni) Stake, and Kimberly (Chris) Garris; also surviving are his nieces and nephews; Julie (Gary) Piehn, Mary (Dennis) Whitmer, Barb Saldecki, Rick (Theressa) Eastman, Anita (Jim) Reed, Judy (Jerry) Calvert and Barb Coomber. Also Step-grandchildren and Step-great-grandchildren. He was preceded in death by his parents, his wife Loraine, one brother, and one sister. Funeral services will be held 10:30 A.M. Friday December 19, 2014 at Immanuel Lutheran Church in Freeport. Rev. Richard "Ros" Schultz and Rev. Dr. Willis R. Schwichtenberg will officiate. Visitation will be from 9:00 A.M. until the time of service at the church. Burial will be in Chapel Hill Memorial Gardens. A memorial has been established in his memory for Immanuel Lutheran Church. Please visit www.burketubbs.com to sign his online guestbook and to share memories.

The family of Glenn O. Coomber created this Life Tributes page to make it easy to share your memories.

Send flowers to the Coomber family.