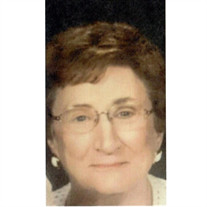 Gloria M. (Buboltz) Kenneke passed away Monday, November 1, 2021, after an extended illness. Gloria was born on December 21, 1931, in Hilbert, Wisconsin. Gloria was preceded in death by her parents Rueben and Helen (Gosz) Buboltz, her brother Jerome “Sonny” Buboltz, son-in law Thomas Erb, grandson Andrew Lehman, and her husband of over 66 years, Lee Kenneke. She attended local schools in the Sheboygan, Wisconsin area and graduated from Howards Grove High School. Gloria wed Llewelyn “Lee” Kenneke, on October 7, 1950, in Sheboygan Falls, WI. Her family fondly recalls her stories of her and Lee listening to the “big bands” of that era and going dancing whenever they could – be it ballroom, or “Polka”. Gloria and Lee worked on their family farms until the 1957 when they followed Lee’s work to Illinois, eventually settling in Freeport in 1959. Gloria is still remembered by many area residents from the years she worked as a “checker” at many Freeport area grocery stores including Kroger’s, A&P, Red Fox, and National T. She eventually retired after 15 years of service as a Deputy Clerk at the Stephenson County Courthouse. Gloria is remembered by her family as a loving mother, homemaker, and excellent cook. She was always intent on keeping things in order and instilling a sense of pride for honesty and work ethic in her family. She is survived by six children: Cynthia Erb, Thomas (Chris) Kenneke, Debra (Mike) Page, Robert Kenneke D.C., David (Cindy) Kenneke, Steven (Amy) Kenneke, eleven grandchildren, ten great-grandchildren, and numerous nieces and nephews. A visitation will be held Friday, November 12 from 4:00 -7:00 p.m. at Bethany United Church of Christ in Freeport. Funeral Services will be at Bethany United Church of Christ on Saturday, November 13 at 10:30am, with internment following at Oakland Cemetery, in Freeport. In lieu of flowers, contributions can be made to the Alzheimer’s Association. The family thanks the FHN Hospice Team for their great support and care they showed Gloria. We would also like to thank the entire staff at Oakley Courts for the kindness and care they showed our mother during the years she spent with them.

Gloria M. (Buboltz) Kenneke passed away Monday, November 1, 2021, after an extended illness. Gloria was born on December 21, 1931, in Hilbert, Wisconsin. Gloria was preceded in death by her parents Rueben and Helen (Gosz) Buboltz, her brother... View Obituary & Service Information

The family of Gloria M. Kenneke created this Life Tributes page to make it easy to share your memories.

Send flowers to the Kenneke family.