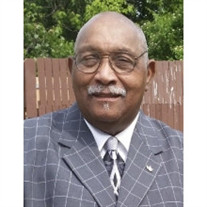 James L. Fane, 75, departed this earthly life on September 25, 2020. He was born on March 26, 1945, in Tippo, MS, to his father, James R. Wittfield and mother, Luella (Fane) Lawrence, he was the third oldest of five children. James attended school in Tippo, MS. He moved to Freeport in 1971, where he later met and married Janet M. Johnson on February 23, 1972, and together there were five children to this union. He was employed by the VFW and later Malcolm Eaton Enterprise where he was employed until his retirement. James was a faithful member of Inspire Word Church under the leadership of Pastor Nathaniel Williams until the closing of the church. He enjoyed fishing and hunting, it did not matter if he spent the entire day and not catch a thing. It was just the thought of being with nature and the challenge of it all. The most important part for James' was his family. He so enjoyed being around his family and having family gatherings. He leaves to cherish his memories, two brothers: Glenn Wittfield, Atlanta, GA; Robert (Barbara Ann) Wittfield, Utica, NY; two sisters: Stella Wittfield, Freeport, IL; Ruth Lawrence, Peoria, IL. Two sons: Johnny (April) Reed, Wichita, KS; James Fane, Jr., Freeport. IL; three daughters: Deanna (Hedgar) Boydie, NY; Sandra (Anthony) Sutton, Freeport, IL; Jeanette (Phillip) Shipp, Freeport, IL. James was preceded in death by his parents, one sister, Vissie (Adams) and one grandson, Eternity Shipp. Visitation will be 1:00 p.m. - 3:00 p.m. Saturday October 3, 2020 at Burke Tubbs Funeral Home. A memorial has been established in his memory. Please sign James guestbook and share a memory at www.burketubbs.com

James L. Fane, 75, departed this earthly life on September 25, 2020. He was born on March 26, 1945, in Tippo, MS, to his father, James R. Wittfield and mother, Luella (Fane) Lawrence, he was the third oldest of five children. James attended... View Obituary & Service Information

The family of James L. Fane created this Life Tributes page to make it easy to share your memories.

Send flowers to the Fane family.