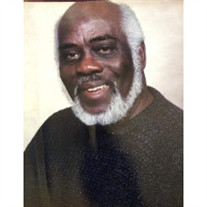 The Life of William Luther McGee William L. McGee peacefully departed this earthly life and entered eternal life on Friday November 27, 2020. He was born on June 29, 1932 in Freeport, Illinois to John and Ethel (Lenoir) McGee. William accepted Christ at an early age. He was a man that loved people. Those in the neighborhood were just like family to him. He made it a point to check on them if he felt there was a need. He loved children and was always giving them candy and spare change. He had a kind heart and giving spirit. He also like to have fun. He liked spending time with family. He liked watching ballgames, playing scratch-off lottery tickets and watching The Price is Right. William was a veteran of the U.S. Army. After his years of service he worked at Burgess Battery, at Micro Switch as a security guard, as an attendant at the Sanitary Laundry and as a custodian for District #145. He was a member of The Gospel Outreach Church where he thoroughly enjoyed volunteering at the Church Pantry. He did this faithfully up to 6 months before his 88th birthday. William was preceded in death by his parents, 6 brothers: Robert McGee, John McGee, Jesse McGee, Ernest McGee, Wallace McGee, and Roosevelt McGee; 4 sisters: Earnestine Bracy, Anna Mae Mayhorn, Eula McGee, and Nola Parker. He leaves behind to cherish his memory his daughters: Ethel Turner (Willie) of Freeport, IL and Michelle McGee of Naperville, IL from his marriage to Irene Morton Cunningham. Also, grandson Garin Turner, great granddaughters: Alexis, Audrey, Katelyn, Aubreyana, and Mackenzie. He also leaves to mourn his passing special friend, Alice Johnson, Ron Howard, and cousin Ralph Lenoir, nieces, nephews, cousins, and a host of friends. Funeral services will be 11:00 a.m. Thursday December 3, 2020 at Burke Tubbs Funeral Home. Visitation 10:00 a.m. until the time of service.Burial will be in City Cemetery. Please sign Mr. McGee's guestbook at www.burketubbs.com

The family of William L. McGee created this Life Tributes page to make it easy to share your memories.

The Life of William Luther McGee

Send flowers to the McGee family.