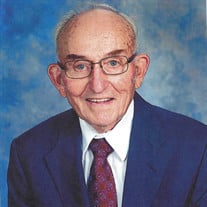 Rev. Bruce C. Janes, Age 95, of Freeport, passed away April 19,2022 in New Berlin, WI. He was born in Adair County, Kentucky on Oct. 27, 1926 and was raised on a small farm. Drafted before he completed high school, he served as a cook’s assistant in World War II, arriving in Germany shortly after the liberation of the country. Responding to the call into the ministry, Bruce attended Lindsey Wilson Junior College and earned his undergraduate degree at Union College in KY. He then continued his studies at Asbury Seminary and Chandler School of Theology at Emory University. At a conference for church leaders, Bruce met Mozelle McCormick, then a Director of Christian Education in Georgia. Their relationship blossomed and they were married on Dec. 26, 1953, forming a permanent ministry partnership. In 1954, he was appointed as full-time pastor in Burnside Kentucky. He served two more appointments in Kentucky before moving to the Northern Illinois Conference of the United Methodist Church in 1960. He faithfully served in the communities where he was appointed—West Pullman (Chicago), Lake Villa, Milledgeville, Orangeville/Afolkey, Prophetstown. Even once he was “officially” retired, he remained active, serving as interim pastor at Dakota/Rock Grove UMC and St. Paul Church of Epleyanna (Davis) and as visitation pastor for Freeport’s Faith UMC. Within the Freeport community, he frequently conducted chapel services at nursing homes and senior residential facilities. Beyond the church, Bruce’s passions included gardening and missions work. The produce from his gardens fed his family and many others. His passion for missions found him participating in work camps at Red Bird Mission in Kentucky, volunteering at Freeport Area Church Co-Op and cheerfully walking in fundraisers for RAMP, CROP and other charities. He enjoyed sharing nature’s bounty, God’s blessings, a good laugh and Christian fellowship. Bruce is survived by his 4 children: Mary (Warren) Widicus, David (Christine) Janes, Ruth (Jeff) Rabourn, Martha (Brian) Connelly and 3 grandchildren: Elizabeth (Daniel) Hartmann, Riley Connelly and Ella Connelly. He was preceded in death by his wife, Mozelle, and his siblings, Leina Janes and Bobby Janes. A memorial service will be held Saturday, May 7, 2pm at Faith United Methodist Church, Freeport, IL. In lieu of flowers, the family requests donations to Church World Services (CROP Walk) or Faith United Methodist Church Mission Fund.

The family of Rev. Bruce C. Janes created this Life Tributes page to make it easy to share your memories.

Send flowers to the Janes family.