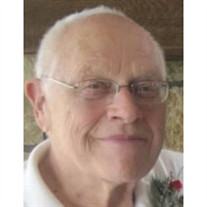 Chauncey H. Wells, Jr 1936 - 2021 Chauncey H. Wells, Jr, 85, of Freeport, died peacefully on February 2, 2021, at FHN Memorial Hospital surrounded by his sons. "Bud" as he was called by many, was born January 26,1936 in Elgin, IL, to Chauncey H. and Helen (Watrous) Wells. He graduated valedictorian from Elgin High School in 1954, received a BA degree from Cornell College in 1958, and a Masters of Teaching (Mathematics) from Bowling Green State University in 1970. Bud found his inspiration for teaching mathematics and coaching from his Junior High math teachers and football coaches. After graduating from Cornell College, Bud moved to Freeport where he taught mathematics and coached football at Freeport Junior High School for 11 years. He then took on the challenge of helping establish a new type of learning environment at the newly built Carl Sandburg Middle School in 1969. Bud accepted the job of Assistant Principal, a position he held for 30 years until his retirement in 1999. He was a fair and steady presence at Carl Sandburg, even handing out a 3 day in-school suspension to one of his sons during his tenure! His son maintains he was simply defending himself. Bud met Patricia Ward, also a teacher, at Freeport Junior High School and they married in 1964. They were married 53 years, until Pat's passing in 2018. While his boys were growing up, Bud was active in YMCA programs and the Freeport Junior Tackle program. Many a time his boys had to squeeze in the back seat of the station wagon with a car full of football equipment. Bud started a positive reinforcement program called H.U.G.S at Carl Sandburg School. He was widely known for his trademark yellow smiley face stickers and his vast tie collection. Bud spent a lot of time in his workshop building wooden crafts to sell at the many Arts & Craft Fairs he attended with Pat over 48 years. Some of his more well known products were the Balance Bug and the Wobbly Walker. Bud also enjoyed spending time at his family's summer cabin in Lauderdale Lakes, WI. Fishing for catfish at night with his sons, watching his grandkids swim, boating, cooking out, and campfires with s'mores were just a few of his favorite activities while at the cabin. Bud was preceded in death by his wife, Patricia, his sister, Nancy Fox of California, and his parents. He is survived by his three sons, David (Kay) Wells of Champaign, Doug (Christina) Wells of Lombard, and Dr. Michael (Sheila) Wells of Galena. Also surviving are his eight grandchildren: Kameron, Noah, Trey, Kelsey, Ryan, Owen, Ayden, and Quinlan. The first born of each of his three sons shares the middle name of "Chauncey", something that Bud took great pride in. He is also survived by his trusty golden retriever Riley. Bud will be put to rest at a quiet graveside family gathering at Calvary Cemetery in Freeport. Special thanks to all the staff at FHN Memorial Hospital, the staff at Manor Court/Bounceback, and Bud's friends and staff at Liberty Estates. Bud's wish was that memorials be made in his name to the charity or church of your choice. Memories and cards can be sent to Mike Wells at 10902 Dogleg Ridge Galena, IL 61036.

The family of Chauncey H. Wells created this Life Tributes page to make it easy to share your memories.

Send flowers to the Wells family.