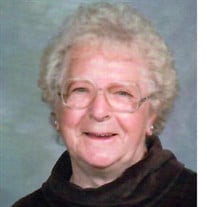 Joan E. Fogel, 98, of Freeport, died Saturday November 13, 2021 at FHN memorial Hospital. She was born August 13, 1923 in Birmingham, England, the daughter of Albert and Florence Osborne. Joan married Robert Fogel on May 19, 1945 in England; he passed away January 27, 1987. Joan was a homemaker and housewife. She served in WWII in The Royal Welch Fusiliers. She was a former member of Community Reformed Church in Freeport. She enjoyed reading and gardening. Joan is survived by her two sons, Jeffrey (Sharon) Fogel of Freeport, IL and Douglas (Diana) Fogel of Chico, CA; four grandchildren, Jennifer, Alex, Maria, and Michael; seven great-grandchildren, Fiona, Oliver, Nikiah, Naomi, Kaden, Felix, and Blake; and one great-great-granddaughter, Melanie. She was preceded in death by her parents, husband, daughter, Gloria, and three sisters. Funeral services will be 11:00 A.M. Friday November 19, 2021 at Burke-Tubbs Funeral Home in Freeport with Rev. Don Jamerson officiating. Visitation will be from 9:00 A.M. until the time of service also at Burke-Tubbs, Freeport. Burial will be in Chapel Hill Memorial Gardens in Freeport. A memorial has been established in Joan’s memory.

The family of Joan E. Fogel created this Life Tributes page to make it easy to share your memories.

Send flowers to the Fogel family.