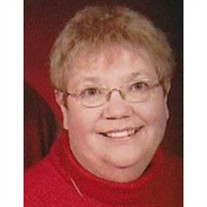 Karen K. Ludwig, 75 of Forreston, IL, died Wednesday February 26, 2020 at FHN Memorial Hospital. She was born April 21, 1944 in Rockford, IL, the daughter of Kenneth and Doris (Mitchell) Johnson. Karen married Stanley Ludwig August 28, 1965 in Freeport, IL; he died April 20, 2015. Karen worked in the insurance industry and was also a homemaker. She was a member of Forreston Reformed Church. She was an Avid Forreston Cardinal, Green Bay Packer and Chicago Cubs fan. She enjoyed spending time with her family, especially her grandchildren. Karen is survived by her sons, Matt Ludwig and Joel (Shawanda) Ludwig both of Forreston; daughter, Donna (Mike) Johann of Rawleigh, NC; sister, Sara (John) Fisher of Germantown, WI; eight grandchildren, Karissa (Ben) Engelberts, Allison (Fred) Bergman, Samantha, Jordan, Jackie, and Joel Ludwig, and Lauren and Dominic Johann; and a great-grandchild on the way. Karen was preceded in death by her parents, husband, and her daughter, Gretchen. Funeral services will be 11:00 A.M. Saturday 29, 2020 at Forreston Reformed Church with Rev. Lyle Zumdahl officiating. Visitation will be from 9:30 A.M. until the time of service at the church. Burial will be in West Grove Cemetery. A memorial has been established in her memory. Please visit www.burketubbs.com to sign Karen's online guestbook and to share memories.

The family of Karen K. Ludwig created this Life Tributes page to make it easy to share your memories.