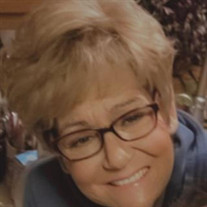 Kari Jo Siefken, 53, of Freeport, passed away, Tuesday, October 26, 2021, at FHN Memorial Hospital. Kari was born December 17, 1967, in Freeport, the daughter of John and Mary (Prosek) Meuris. On October 28, 1995, Kari, married Jerald "Jerry" Siefken in Dixon. Kari worked as a Domestic Engineer for many years. She was an excellent cook and known for doing great craft work. She enjoyed being around her dogs, gardening, working with her flowers, but more than anything else spending time with her beloved family. Kari Jo was kind and giving to everyone she met. Surviving is her husband, Jerald "Jerry" Siefken of Freeport; mother, Mary Jo Meuris of Freeport; son, Chad (Sarah) Siefken of Forreston; daughters, Sabrina Siefken of Freeport, and Jodi (Ryan) Point of Oregon; three brothers, Kurt Meuris, Kraig Meuris and Kyle Meuris. Also surviving are two granddaughters, Alexis, and Aubrey Point. Kari Jo was preceded in death by father, John Meuris; brother, Keith Meuris; sister, Jaralyn; and her grandparents. A Gathering will be held Monday, November 1, 2021, at Burke Tubbs from 3:00 pm – 6:00 pm. In lieu of flowers a memorial has been established in Kari Jo’s memory. Please sign her guestbook and share a remembrance at www.burketubbs.com

The family of Kari Jo Siefken created this Life Tributes page to make it easy to share your memories.

Send flowers to the Siefken family.