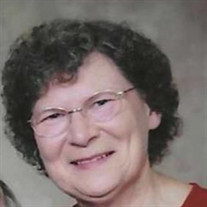 Marian Louise (Weegens) Hayes, 81, of Forreston, IL., passed away at Serenity Hospice and Home in Oregon, IL., on Monday February 7, 2022. Marian was born November 8, 1940, at home in Lincoln Township, the daughter of Justus and Edna (Schoonhoven) Weegens. She graduated from Forreston High School in 1958 and began working at Freeport Insurance Company a couple months later. She married LeRoy “Roy” Hayes on July 22, 1961, in Forreston. Mr. Hayes preceded her in death on May 8, 2021. Marian formed many close and life-long friends over the years. She was a hard worker who had many interests and hobbies. She was very active with the Forreston United Methodist Church, the Forreston Sunshine Home Extension and was an avid bowler for over 40 years. As a bowler, she carried an average score of 175 and achieved a 600 series multiple times. After moving back to the farm in Forreston, she helped raise their flocks of award-winning Dorset and Columbia Sheep. Marian could often be found out working in her flower beds for many hours on a beautiful day. Marian is survived by her daughters, Tamara (Wes) Martin of Oregon, Melissa (Ron) Hayes-Brechon of Cave City, Arkansas and Heidi (Jim) Lauber of Heath, Texas; five grandchildren Andrea (Travis) Wood Alachua, Florida, Aubrey (Aaron) Eads of Byron, Abigail (Tyler Burke) Martin of Oregon and Michael and Joshua Lauber of Heath, Texas. She is also survived by five great grandchildren and one brother, Willis Weegens. A private burial service at White Oak Cemetery in Forreston will be held. The family wished to express their deepest gratitude to the staff at Serenity Hospice and Home. Memorials can be made out to Serenity Home or the Forreston United Methodist Church. Please sign Marian’s guestbook and share a remembrance at www.burketubbs.com

Marian Louise (Weegens) Hayes, 81, of Forreston, IL., passed away at Serenity Hospice and Home in Oregon, IL., on Monday February 7, 2022. Marian was born November 8, 1940, at home in Lincoln Township, the daughter of Justus and Edna (Schoonhoven)... View Obituary & Service Information

The family of Marian Louise Hayes created this Life Tributes page to make it easy to share your memories.

Send flowers to the Hayes family.