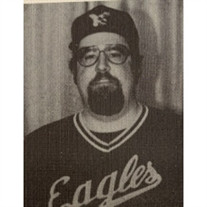 On Wednesday, December 23, 2020, Mark (Yak) Amerpohl passed away at home at the age of 67. Mark (Yak) was born June 8th, 1953 in Freeport, Illinois to Laverne (Yak) and Betty Lou (Allen) Amerpohl. Mark graduated from Freeport High School in 1971 and then went on to graduate from Illinois College in Jacksonville, Illinois. He moved to Oregon, Illinois where he married Janis Dillon on November 23rd, 1996. She passed away on April 1st, 2009. Mark and Janis owned the Cheese Shop in Conover Square in Oregon for several years. Marks passion was sports and his family. Mark was always in great spirits and had a great sense of humor despite his condition. A sweet and gentle soul and full of wisdom. Going to be missed by all. Mark was always involved in sports. After high school sports Mark played fast pitch softball as a pitcher at a high level for many years which he traveled to many states to play. He scouted for Mike Curry and the Aquin Bulldogs in the eighties where they won a couple of state championships. He also coached basketball in the lower levels for Aquin. In 1989 he was an assistant coach to Brian Benning when Orangeville High School won the 1A state football championship. He then followed Brian to Harlem High School in Machesney Park, Illinois to coach as well. He worked with Don Werntz and "crew" for many years for the IHSA state football pairings even after he was homebound, they made it work. We want to thank his caregivers Andi, Kendra, and Linda along with Mercy Health Home Care nurses. Survived by his sisters Mary Humphrey, Mcconnell, Luanne (Scott) Strohecker, Freeport. Stepdaughter Allison Dillon, Rockford. Step grandsons Jayce & Jayvion Dillon. Nephews Paul (Tracey) Humphrey, Lena, Joe (Angie) Humphrey, Lena, Adam Strohecker, Freeport. Niece Amanda Strohecker, Freeport. Great nieces Salena & Sierra Strohecker, Kassidy & Kalli Humphrey, great nephews Hudson Humphrey, Trent Strohecker, Drew Presson, and Zach Arachikavitz. Cousins Janet Beger and Cathie (Jeff) Hufford. He is preceded in death by his father, mother, maternal grandparents, paternal grandparents, wife Janis, stepson Jay Dillon. Visitation will be 3:00 p.m. - 6:00 p.m. Wednesday January 6, 2021 at Burke Tubbs Funeral Home, Freeport. A memorial has been established in his Yak's memory. Please sign his guestbook and share a remembrance at www.burketubbs.com

The family of Mark (Yak) Amerpohl created this Life Tributes page to make it easy to share your memories.

Send flowers to the Amerpohl family.