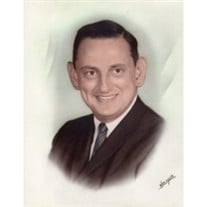 Richard (Dick) Scovill passed away peacefully, surrounded by his loving family, on September 10, 2019. He was born in Freeport IL on October 21, 1934 to Ann Brown and Warren Scovill. He was a graduate of Freeport Senior High (1952). Dick served in the US Air Force (1955-1958) which included time at the Pentagon, and he was proud of his service to country. Dick earned a degree in mathematics from the University of Illinois, and went on to have a long and successful career as a computer programmer at Micro Switch. His analytical mind made him the family champion at Scrabble and gin rummy. He was also a whiz at jigsaw and crossword puzzles. Favorite past times included being with his family, watching classic movies, reading a good mystery, travel and watching sports. In 1966, he married his much loved wife Sybil (Mensenkamp) Keith. The two of them went on several cross country trips, and enjoyed a romantic 35th anniversary in Hawaii. He is survived by his wife and family of Lynne Keith-McMullin (Daniel), Michael Keith, Matthew Keith (Judy), Daniel Scovill (Donna). His grandchildren are Caitlin Menge (Daniel), Duncan Keith, and Emma, Anna and Daniel Scovill. Nephews and nieces are Larry Knipschield, Dennis (Deb) Bull, Kathy (Arlene) Bull, and David (Cheryl) Kuehl as well as great nephews and nieces. Sisters-in-law are Donna Klapp and Rita Dinges. He is preceded in death by three sisters and his parents. On Monday, September 16, there will be a visitation at 1:00 followed by a funeral service at 2:00 at Burke Tubbs. Graveside burial for immediate family will be Tuesday. In lieu of flowers, please make donations to either Little Cub Field or the local Salvation Army. Please sign Mr. Scovill's guestbook and share a memory at www.burketubbs.com

Richard (Dick) Scovill passed away peacefully, surrounded by his loving family, on September 10, 2019. He was born in Freeport IL on October 21, 1934 to Ann Brown and Warren Scovill. He was a graduate of Freeport Senior High (1952). Dick served... View Obituary & Service Information

The family of Richard "Dick" Dale Scovill created this Life Tributes page to make it easy to share your memories.