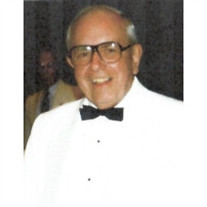 Sanford (Sandy) Herrling passed away May 30, 2020 from pancreatic cancer. He was a 30-year resident of Peoria, AZ. Born in Madison, Wisconsin in 1924, Sandy served during WWII as a fighter pilot who flew P-47s with the Army Air Corps. He survived being shot down in the Pacific and returned to Madison, WI after the war. Sandy graduated from the University of Wisconsin Madison. He married his wife of 73 years, June Lawrence, on May 24, 1947. He went into the insurance business and was the manager of the Milwaukee office of General Casualty Company of Wisconsin. He and his family lived in Wauwatosa, WI for 23 years. In 1971 Sandy and his brother, Duke, purchased Wright, Ellis, Herrling Insurance Agency in Freeport, IL. This agency later became Herrling & Schmitt Inc. Sandy served the Freeport community in various volunteer capacities including serving as president of United Way of NW IL. He enjoyed being a member of the Noon Kiwanis Club both in Freeport and Peoria AZ. Sandy and his wife, June, were members of the Freeport Country Club. He retired from the insurance business in 1986, retiring shortly thereafter to Peoria, AZ where he belonged to the Union Hills Country Club and served one year as president. Sandy was an avid golfer and bridge player throughout his life. He was completely devoted to his family whom he always supported and loved unconditionally. He was a good, smart, trustworthy, remarkable man who was a lifelong role model for his children and grandchildren. He leaves behind his wife, June, his brother, Duke Herrling, son, Mark Herrling, daughter, Lynn Wirth-LeMond, grandchildren Travis Wirth, Jessica Wirth-Strine and Allison Wirth along with six great-grandchildren and one great-great grandson. He was preceded in death by his parents and his grandson, Ryan Wirth. He lives on in the hearts of the many people who loved him and will miss him dearly.

Sanford (Sandy) Herrling passed away May 30, 2020 from pancreatic cancer. He was a 30-year resident of Peoria, AZ. Born in Madison, Wisconsin in 1924, Sandy served during WWII as a fighter pilot who flew P-47s with the Army Air Corps. He survived... View Obituary & Service Information

The family of Sanford (Sandy) Herrling created this Life Tributes page to make it easy to share your memories.

Send flowers to the Herrling family.