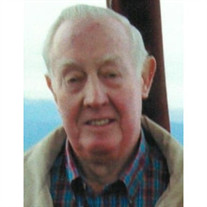 Zael W. Klapp, 90, of Freeport passed away May 7, 2019. Zael was born June 17, 1928 in Freeport, the son of Wilbur and Florence (Walbann) Klapp. Zael married Donna Burton on June 17, 1981. A long time Freeport, businessman, owner of Klapp Motor Sales, which closed last year. Klapp Motor Sales, started with his dad in 1935 lasted till 2018. Their dealer plate 737 was issued for 82 consecutive years. Zael started going to auctions at the age of 8. He graduated from Bradley University, and joined PI KAPPA ALPHA fraternity. After graduation, Zael joined his dad at the Nash dealership, he was the shop foreman. In 1954 he moved to South Street from downtown Freeport. You could always find Zael in the front row at the auto auctions locally and in AZ. He was proud he saw all the states in the union. His visit to New Orleans's encouraged his love for Jazz. Everyone knew Zael loved the Packers, not as much as he loved telling jokes. The Indy 500 was a must see. He sponsored and played on a bowling league majority of his life. Donna and Zael, for many years where in card clubs. Zael attended St. John UCC. Zael is survived by his wife, Donna Burton Klapp; daughters, Suzan Carpin, Dyan (Scott) Burton-Williamson, Angela (Dan) Burton Roque; grandchildren, Mark E Beall, Jr., Breanne (Kendall) Wisehart, Rachel Williamson, Kayla Carpin, Cassandra (Ryan) Boenigk; nephew, Tybo (Mary Jo) Wilhelms; niece, Cyndi Barefoot; and friend, Mark Beall, Sr. He was preceded in death by parents and sister, Juanita Wilhelms. Funeral services will be 11:00 A.M. Monday May 13, 2019 at St. John United Church of Christ with Rev. Hank Fairman officiating. Visitation will be from 9:30 A.M. until the time of service. Burial will be in Oakland Cemetery. A memorial has been established in his memory. Please share a memory and sign Zael's online guestbook at www.burketubbs.com

The family of Zael W. Klapp created this Life Tributes page to make it easy to share your memories.

Send flowers to the Klapp family.