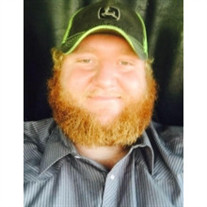 Adam Michael Spittler, 27, of Adeline, IL passed away Friday May 21, 2021 in his home surrounded by his family. He was born May 26, 1993 in Rockford, IL to Gary and Robin (Prentice) Spittler. Adam was a truck driver for Buckshot Ridge Farms & Excavating. Adam was a 2013 graduate of Forreston High School, that studied auto mechanics at Whiteside Area Career Center. Adam was actively involved in FFA and participated in many activities but restoring tractors was his favorite. In 2012 his tractor restoration team made it to compete at the National Convention in Indianapolis, IN. Adam played football, and baseball. Adam began playing baritone, and tuba in Jr High and later learned how to play the guitar. His love for music was a saving grace through the tough times. Adam was a blessing from the time he was born, his parents had been patiently awaiting a second child. Through his life he blessed many others with his presence. He was friends with everyone, and never held a grudge. He could often be found working on people's vehicles and lending a hand to anyone in need of help. Adam had many hobbies, he had a special love for trucks, motorcycles, semis and tractors. He loved snowmobiling, tractor pulling, fishing, and hanging out with his friends. Adam served on the board of directors for the Silver Creek Museum, and The Antique Engine Club in Freeport, IL. Adam was diagnosed with stage four testicular cancer in July 2020, he battled everyday to beat cancer, enduring brain surgery, several rounds of chemotherapy, radiation and other procedures, Adam and his family were very hopeful that he would be cured and able to stay on earth but the lord had other plans. Adam is survived by his parents Gary and Robin Spittler of Adeline, IL; two sisters Danialla (Justin Mills) Schreiber of Forreston, IL and Michelle Spittler of Freeport, IL; brother Noah Spittler of Adeline, IL; Grandfather Harry B. Prentice; nieces and nephews Mackenzie, Dyllan, and Jaxson; Uncle Harry (Linda) Prentice; Aunt Rhonda (Jeremy DeBord) Prentice. He is preceded in death by his paternal Grandparents Francis and Janet Spittler and maternal Grandmother Rita Prentice. There will be a visitation Friday May 28, 2021 from 5:00-9:00 P.M. at Leaf River Baptist Church. A visitation will be held Saturday from 9:00 A.M. until the time of service. Funeral services will be 11:00 A.M. Saturday May 29, 2021 at Leaf River Baptist Church with Pastor Billy Hardy officiating. Burial will be in North Grove Evangelical Cemetery. In lieu of flowers a memorial has been established in Adam's memory.

Adam Michael Spittler, 27, of Adeline, IL passed away Friday May 21, 2021 in his home surrounded by his family. He was born May 26, 1993 in Rockford, IL to Gary and Robin (Prentice) Spittler. Adam was a truck driver for Buckshot Ridge Farms... View Obituary & Service Information

The family of Adam Michael Spittler created this Life Tributes page to make it easy to share your memories.

Send flowers to the Spittler family.