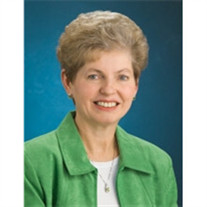 Beverly A. Haselhorst, age 69, of Freeport, Illinois passed away on January 24, 2019 after a nine year battle with ovarian cancer. Born in Freeport on May 14, 1949, she was the daughter of Robert I. Koch and P. Joyce (Kupersmith) Koch. Bev was raised on her maternal grandfather's farm south of Warren where she also graduated from the Warren High School in 1967. While attending the University of Illinois, she lived at the 4-H House sorority. Bev earned James Scholar, Mortar Board, and Bronze Tablet honors and received a B.S. Degree in Home Economics Education in 1971. She was awarded a graduate fellowship at the University of Illinois and had a research assistantship in textile sciences during her last semester on campus and upon graduating, received a M.S. Degree in Textiles and Clothing in 1974. She taught Family and Consumer Sciences (Home Economics) for 13 years at Dakota Junior/Senior High School as well as teaching at Highland Community College part-time for 4 years. Following her teaching positions, Bev worked part-time for 10 years as an Educational Program Coordinator for University of Illinois Extension, Stephenson County. Bev met her husband, Peter O. Haselhorst, while they were both students at the University of Illinois. They were married at the Warren United Methodist Church on August 28, 1971. Bev and Pete lived primarily in Illinois as well as Arizona. When they were first married, they lived in Mesa and Glendale, AZ while Pete attended Air Force pilot training for the Springfield, IL Air National Guard. Since retirement, they have wintered in Scottsdale, AZ which has been a great joy for them both. Bev was an avid participant in various community service activities and received the YWCA Women of Excellence Community Services Volunteer Award in 1991. She was a member of Chapter LI, P.E.O., member and past-president of Delta Kappa Gamma Women Educators, member and past-president of Stephenson County Home Economists, and a past member of the Orangeville Educational Foundation. She and Pete enjoyed memberships with the Highland Area Garden Club, Cedarville Area Historical Society, and Freeport and Chicago Art Museums. While spending time in Arizona, they held memberships with the Desert Botanical Garden in Phoenix and the Museum of the West in Scottsdale. They regularly attended the Desert of the Hills Presbyterian Church in Scottsdale, AZ. She was an advocate for University of Illinois Extension and 4-H. Bev was a member of the Stephenson County Extension Council, 4-H Superintendent, and recently completed a 9-year term on the Illinois 4-H Foundation Board. Bev, alongside her husband Pete, supported the University of Illinois and was a member of the University of Illinois Foundation and President's Council as well as the Rockford Area Illini Club. They established an endowment and regularly awarded student scholarship funds. They were also long-time season ticket holders for University of Illinois Football which they enjoyed attending in the family airplane with Pete as the pilot. Beverly is survived by her husband Peter, daughter Corinn (Dave) Carter of Canal Winchester, OH, and son Bryce Haselhorst of Scottsdale, AZ as well as many other extended family members. A celebration of Beverly's life will be held on Saturday, February 9, 2019 in the Green Room at the Wagner House in Freeport, IL. A gathering of family and friends will begin at 10 a.m. with a memorial service at 11 a.m. followed by a luncheon. All family and friends are welcome. In lieu of flowers, memorial contributions can be made to the Illinois 4-H Foundation. Please sign Beverly's guestbook and share a remembrance at www.burketubbs.com.

Beverly A. Haselhorst, age 69, of Freeport, Illinois passed away on January 24, 2019 after a nine year battle with ovarian cancer. Born in Freeport on May 14, 1949, she was the daughter of Robert I. Koch and P. Joyce (Kupersmith) Koch. Bev was... View Obituary & Service Information

The family of Beverly A. Haselhorst created this Life Tributes page to make it easy to share your memories.

Beverly A. Haselhorst, age 69, of Freeport, Illinois passed away...

Send flowers to the Haselhorst family.