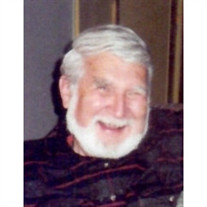 Charles C. Peterson, 90, of Freeport, IL passed away Thursday, February 11, 2021 at Parkview Home in Freeport. Charles was born on January 14th, 1931, at the home of his parents, Carroll P. and Elizabeth E. (Johnson) Peterson in Minot, North Dakota. In 1937, the family moved to Fargo, where Charles graduated a year early from Fargo High School. In the summer of 1947, Charles and five friends enlisted in the Air National Guard, where he served as an crash rescue specialist. During the blizzard of 1949, he was deployed to Rapid City, S.D. and Cheyenne, Wyoming, and spent the winter pushing bales of hay out the cargo door of C-46 aircraft to feed cattle stranded in the deep snow. Charles married the love of his life, Muriel J. Drury, on January 6, 1951 in Moorhead, MN. Later that year his Guard unit was activated and sent to Moody AFB, Georgia. Upon release from the active duty in 1952, Charles resumed his job as the mail room supervisor at the Fargo Forum newspaper and earned his engineering degree in 1956 at North Dakota Agricultural College (now North Dakota State University). In 1957, he was hired by Micro Switch, a Division of Honeywell, in Freeport and spent the next 30 years working on projects such as the switches for the Mercury, Gemini and Apollo capsules for NASA and various projects until his retirement. Near the end of his career at Micro Switch, Charles fulfilled one of his life-long dreams by earning his Federal Aviation Administration (FAA) Private Pilot Certification and flew and owned several Ultralight aircraft, then purchased a 1946 Ercoupe single-engine airplane. Even though he had many achievements that affected many people in positive ways, it was this one goal that he was most proud of on a personal level. In retirement Charles continued to delve into the aviation world by earning his FAA Airframe and Powerplant Certification. He was hired as an Aircraft Mechanic, first at Flagstaff Pulliam Airport in Flagstaff, Arizona and then at Deer Valley Airport north of Phoenix, Arizona. He wrapped up his working life in Albuquerque, New Mexico as a Reservation Specialist at Southwest Airlines. He and Muriel then moved to Loveland, Colorado. Charles was a devoted husband, father, grandfather, great grandfather, and friend. He served as the president of his union at the Fargo Forum, a Democratic Precinct Committeeman, a Scoutmaster for the Boy Scouts, and Lector at various Catholic parishes. He served on the St Thomas Aquinas and Diocese of Rockford school boards. He was an Election Judge and taught in the apprentice program at Highland College. Charles and Muriel served for years as Mentors in the Youth At Risk organization in Phoenix and Albuquerque. Charles is survived by his sister Jeanine, children Thomas (Diane) Peterson, Kimberly (Phillip) Vittorio, Susan Peterson, David Peterson (Sandra Henke) and Douglas (Kelly) Peterson; grandchildren Kristie, Lori and Cherie Peterson, Kelly Vittorio (Daniel Piorek), Lindsay (Louis) Tasse; great-grandchildren Hailey Piorek, Theo Conway and Ella Piorek. Charles was preceded in death by his daughter Mary Claire who died at birth in 1960, his wife Muriel in 2016, his parents Carroll and Elizabeth Peterson and three of his four siblings Marilyn, Harriet and Harris. A visitation and memorial mass will be held Monday, June 28th at St. Thomas Aquinas Church. The visitation will begin at 9:30 a.m. and mass at 10:30. Burial will be immediately following mass at Calvary Cemetery on West Stephenson Street. All are invited to an informal lunch and afternoon celebration at Krape Park Community Center (known as The Warming House to our generations) at approximately noon.

The family of Charles Carroll Peterson created this Life Tributes page to make it easy to share your memories.

Send flowers to the Peterson family.