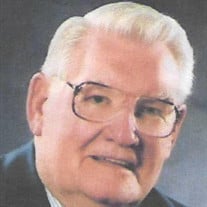 David L. Snapp, 89, of Forreston, passed away, Thursday January 26, 2022, at Serenity Hospice Home, Oregon. David was born June 5, 1932, in Forreston, to Chris and Ima (Bush) Snapp. He was a lifelong Forreston resident, graduating from Forreston High School in 1950. He was a Korean Vet, serving from 1952-1954. He married Eleanor Wubbena in 1957. He worked for his brother, Ralph, for many years at the Cities Service Gas Station and also drove school bus for five years. Then deciding to switch jobs, he went to work for Montgomery Ward, under the leadership of Dean Ruckman who became a close friend. After two years at Wards, he went to work at Allstate Insurance as an agent. There he won many awards for top sales. In 1976, David went blind in his right eye during a cataract surgery, and he was considered legally blind for 20 years. During this time at home, he developed a peanut brittle recipe. For many years he made and donated peanut brittle to many friends and businesses. After 20 years, God restored his vision in his left eye to 20/20 while undergoing a cataract procedure at a clinic in Tarpon Springs, Florida. Dave loved to tell his eye story about how God gave him a miracle and restored vision in his left eye. His community memberships included Forreston Reformed Church, Excelsior Lodge of Freeport, lifetime VFW member, and a lifetime member of the American Legion Post 308. Dave was extremely proud of the Veteran’s Memorial in the Forreston Park that he helped to promote and gain sponsors. In 1972, Dave and Eleanor purchased a piece of God’s creation in the Northwoods of Wisconsin where they enjoyed summers. Dave often joked that they bought a piece of cake and continued to put frosting on it for years. He enjoyed time with his family and watching the grandchildren grow up. Dave made many friends over his lifetime, and it was said of him that he never met a stranger. His life was full, and he was ready to see what was going on the other side. Surviving is his wife, Eleanor Snapp of Forreston; son Jeffry (Lori) Snapp of Waunakee, WI.; daughter, Jodie (David) Lehne Byron; and four grandchildren, Emily Lehne, Ellie Lehne, Sarah (Shawn) Budden, and Nathan Snapp. Dave was preceded in death by his parents, brothers, Ralph (Irene) Snapp Ed and (Eileen) Snapp; and sister, Donna (Bob) Schnieder. Funeral services will be 3:00 P.M. Saturday January 29, 2022, at Forreston Reformed Church. Visitation 1:00 P.M. until the time of service. Burial will be in White Oak Cemetery.

The family of David L. Snapp created this Life Tributes page to make it easy to share your memories.

Send flowers to the Snapp family.