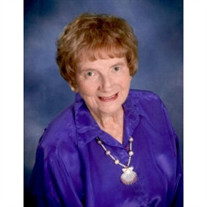 Eleanor Joyce Prendergast, 92, of Freeport, passed away peacefully on January 31, 2020 at Manor Court. Born in Boston, MA on May 18, 1927 she was the daughter of Coleman S. Joyce and Julia (O'Connor) Joyce. She was raised in the West Roxbury neighborhood of Boston and graduated from St. Thomas Aquinas High School. She graduated from Kathleen Dell School and attended Northeastern University. She worked at IBM until her marriage to John F. Prendergast on April 15, 1950. John and Eleanor delighted in more than 50 years of marriage. They lived in Jamaica Plain and Walpole, MA until they retired to their beloved Cape Cod home, "Coveside", in Orleans, MA. After her husband died, she moved to Freeport, IL in 2008 to be close to her daughter and grandchildren. Eleanor worked for the Flatley Company, the Orleans Chamber of Commerce, and as a writer and raconteur. She was a community volunteer for the Mother Seaton Guild, the Jamaica Hills Association, the Walpole Women's Club, St. Joan of Arc Guild of Orleans, and Cape Cod Hospital Auxiliary. She was an active member of the PEO Sisterhood on Cape Cod (Chapter Q) and in Freeport (Chapter BE). Many will remember Eleanor for her astounding story-telling ability. She developed her writing skills in the Chatham Library Writers Group and is a published author. An avid reader, she was a member of the Twentieth Century Book Club and PEO - BE Book Club in Freeport. Golfing, skiing, and traveling were among her other hobbies. Ever the storyteller, she frequently entertained family and friends with tales of her adventures, big and small. She was creative, humorous and full of life. Mrs. Prendergast was preceded in death by her husband, John Prendergast, her parents, and her brother, William Joyce. She is survived by her two children, Julie (Steve) Dorsey of Freeport and Jeff Prendergast of San Francisco. She was a proud, loving nana to her granddaughters Eleanor (Molly) Dorsey Veh of Milwaukee and Jessica Dorsey of Chicago, and thoroughly enjoyed recent travel adventures with her life-long friend Robert Cunningham. The funeral Mass for Mrs. Prendergast will be Friday, February 7, 2020 at 10:30 am at St. Thomas Aquinas Church in Freeport. A visitation will be held at Burke-Tubbs Funeral Home on Thursday, February 6 from 4:00 pm - 6:00 pm. She will be buried next to her husband in the Massachusetts National Cemetery in Bourne, MA. A memorial fund has been established. Please sign Mrs. Prendergast guestbook and share a memory at www.burketubbs.com

Eleanor Joyce Prendergast, 92, of Freeport, passed away peacefully on January 31, 2020 at Manor Court. Born in Boston, MA on May 18, 1927 she was the daughter of Coleman S. Joyce and Julia (O'Connor) Joyce. She was raised in the West Roxbury... View Obituary & Service Information

The family of Eleanor Joyce Prendergast created this Life Tributes page to make it easy to share your memories.

Send flowers to the Prendergast family.