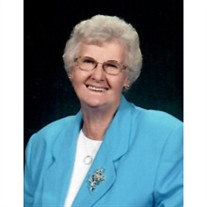 Erma Ruth Duitsman, 93, lifetime resident of Forreston, passed away in her home of 73 years Tuesday, July 27, 2020. Daughter of John and Margaret (Korf) Schmitt, she was born January 10, 1927 in Stephenson County. She attended the one room Forreston White Oak School before graduating from Forreston High School in 1944. Erma and Robert (Bob) Duitsman met at Forreston Grove Presbyterian Church and were married there May 18, 1946. They had two daughters and together they raised them on the Duitsman family farm that they farmed together for 50 years. Erma worked a variety of jobs in her lifetime...loving the farmer's wife the best. She was a life long member of Forreston Grove Presbyterian Church. Erma put her faith in God to work through various activities and organizations in the church as well as in the community. Her ability to create was obvious through her cooking, baking, sewing, floral arranging, rubber-stamping, and crafting. Friends of all ages and family were a great part of her life. She deeply loved her family, attending grandchildren's events and rocking those great grandchildren. Her legacy of love has created a lasting impact for family and friends. She is survived by her daughter Diane Duitsman of Forreston; son-in-law Allan Gravenstein of Shannon; three grandchildren: Jennifer (Jim) Ruzicka of Kildeer IL, Amy (Ron) Cahill of Winfield IL, and Jeremy (Janesa) Gravenstein of Forreston; and five great grandsons: Jonathan and Jacob Ruzicka, Connor and Nicholas Cahill, and Rhett Gravenstein. Preceding her in death were her husband Bob (1999), daughter Carol Gravenstein (1998), her parents Margaret (1951) and John (1966), brother Melvin Schmitt ( 1981), and sister Pauline Krum (2005). Graveside services will be held Tuesday August 4th at the Forreston Grove Cemetery at 10:00. A memorial has been established in Erma's name for Forreston Grove Church, Mercy Health Hospice, or charity of donor's choice, which may be sent to Burke Tubbs Funeral Home in Freeport. Visit www.burketubbs.com to leave a memory or condolence.

Erma Ruth Duitsman, 93, lifetime resident of Forreston, passed away in her home of 73 years Tuesday, July 27, 2020. Daughter of John and Margaret (Korf) Schmitt, she was born January 10, 1927 in Stephenson County. She attended the one room Forreston... View Obituary & Service Information

The family of Erma Ruth Duitsman created this Life Tributes page to make it easy to share your memories.

Send flowers to the Duitsman family.