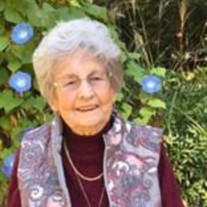 Estelle Mae Ivanhoff, 95, of Freeport, died peacefully and gained her angel wings on Tuesday, October 12th, 2021, at the University of North Carolina Medical Center in Chapel Hill, North Carolina. She was born March 2nd, 1926, in Belvidere Illinois, the daughter of John and Florence Buell. After graduating from Belvidere High School Estelle graduated from the Hamilton School of Commerce in Rockford. In 1947 Estelle married Richard Ivanhoff, also from Belvidere. In 1962 they moved to Cedarville, Illinois in a house on Cedar Creek where they lived for the next fifty-five years. They were married for seventy years. Estelle was talented in so many aspects of her life. She was a wonderful wife and mother. She was independent and curious, always wanting to figure out on her own, how things worked. She never gave up. She worked part time at Structo and other businesses. One of her most recent projects was learning the internet and social media. She was a bowler in her younger days. She was a golfer, becoming a member of Bel-Mar Country Club, and the Freeport Country Club and joined the Park Hills golf leagues. She was an avid horse woman since she was young, becoming a member of the Boone County Saddle Club. She rode horses in parades, showed them in horse shows and rode on four-day trail rides. She also loved to travel. She and Richard traveled the United States and went to Hawaii, Canada, Mexico, Taiwan and China. After they retired, they spent a few months in the southern United States every winter to avoid the cold weather. After Richard passed, she moved to North Carolina to be near her son Mark and his wife Karen. She loved being close and she loved North Carolina. Estelle is survived by son, Mark (Karen) Ivanhoff of Chapel Hill, NC, and granddaughter, Jennifer (Charles) Lavallee of Silver Spring, MD. She was preceded in death by, her parents, her husband Richard Ivanhoff and son, Gary Ivanhoff. Memorial services will be held November 10th at the Burke Tubbs funeral home. Burial will be in Highland Gardens of Memories, Belvidere, IL. A memorial has been established in her memory.

The family of Estelle Mae Ivanhoff created this Life Tributes page to make it easy to share your memories.

Send flowers to the Ivanhoff family.