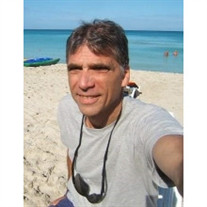 Michael David Hartman, beloved husband, father, and brother died suddenly at home of natural causes on Wednesday, June 17, 2020. Born in Wisconsin Rapids, Wisconsin, December 13, 1946, Michael was the son of Basil and Charlotte Hartman of Freeport, Illinois, U.S.A. Michael was the husband of Huguette (D'Amours) Hartman and father of Anne-Marie and Alicia (Robbie) Ashley and grandfather of Winston Ashley all of whom he loved deeply. Mike was a man of peace, philosopher, environmentalist, and always a child at heart. A humanitarian at his core, he would find the good in whomever he met, and had a skill like no other when it came to striking up a conversations with strangers. He was a cycling enthusiast, devoted schoolteacher until retirement, treasured and valued friend, thoughtful and attentive son. He was a family man, always connected with his cousins, nieces and nephews. Survived by his two brothers who were his comrades throughout life, Mike was part of the constant joking and uplifting of one another. With almost 50 years of devoted companionship to the love of his life, Huguette, he was also a caring and protective father to his two girls. An unique and kind soul, he will be deeply missed. Mike was a graduate of Aquin High School, class of 1964. Mike is survived also by his brothers Charles (Cheryl) Hartman, and Greg Hartman and Greg's former spouse, Debra Rockey, and many cousins, nieces, and nephews residing throughout Canada and the United States. Due to the pandemic restrictions, there will be no public visitation or funeral service. A celebration of life will be held when times allow. If so desired, contributions may be made to the Upper Room Food Bank and Soup Kitchen, 33 Belmont Street, Charlottetown, Prince Edward Island, Canada C1A5G9. Please sign Michael's guestbook at www.burketubbs.com

The family of Michael David Hartman created this Life Tributes page to make it easy to share your memories.

Send flowers to the Hartman family.