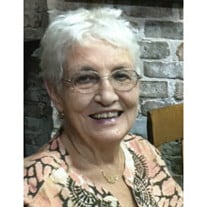 Minnie Stella Clark, 80, of Freeport, died Wednesday October 24, 2018. She was born September 5, 1938 in Cicero, IN, the daughter of Charles and Mildred (Sutton) Patton. Minnie married Robert T. Clark April 19, 1964 in Indianapolis, IN. She worked as a substitute teacher and worked for the Freeport Public Library. She was a member of Prince of Peace Lutheran Church, Freeport Garden Club, P.E.O., and D.A.R. She was a member of many local creative clubs including book club, craft and sewing groups. Minnie volunteered as a docent at the Freeport Museum, as well as at Amity's Attic and Norman C. Sleezer Home For Youth. Minnie is survived by her husband Robert Clark of Freeport, IL; son, Hans "Peter" Clark of Freeport, IL; two daughters, Heidi Clark of San Francisco, CA and Anne (Peter) Downes of Roselle, IL; two sisters, Rebecca (Richard) Taylor of Charleston, SC and Rachel (Robert) Dettman of Adelaide, Australia; and her granddaughter, Rebecca Downes. She was preceded in death by her parents and an infant brother. A memorial service will be held 11:00 A.M. Friday November 2, 2018 at Prince of Peace Lutheran Church in Freeport with Rev. Keith Johnson officiating. Visitation will be from 10:00 A.M. until the time of service at the church. A memorial has been established in her memory for the Freeport Art Museum and Amity Daycare. Please visit www.burketubbs.com to sign Minnie's online guestbook

The family of Minnie Stella Clark created this Life Tributes page to make it easy to share your memories.

Send flowers to the Clark family.