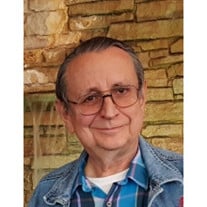 Nicholas J. Losco, 78, passed away unexpectedly Wednesday December 23, 2020 in Apache Junction, AZ. He was born February 21, 1942 in Freeport, IL to Hector and Caroline (Balsamo) Losco. Nick met his wife, Vera Lister at Micro Switch. They were married December 6, 1979 in Las Vegas, NV. Nick was a member of St. Mary's Catholic Church in Freeport, IL. He was employed at Micro Switch for over 30 years before retiring. After his retirement, Nick became known as "Nicky J at the Keyboard" because he enjoyed playing piano and keyboard at various places such as Senior Centers, Nursing Homes, and special events. Nick also performed on the radio for over 23 years, sang with the Monroe Barbershop group in Wisconsin and Leisure World Barbershop group in Arizona. Besides music, Nick's favorite pastimes included playing bingo, slot machines, and performing for people. He is survived by his wife, Vera; stepdaughter, Cristina (Joe) Cobb of Glendale, AZ; three stepgrandchildren, Rose, Erica, and Brandon; one step-greatgrandchild, Evan; brother, John (Darlene) Losco of Freeport, IL; sister-in-law, Judy Losco; good friends, Wes (Joanie) Dugan of Apache Junction, AZ, Patricia Sunderman, and Robin Walton; and his cat, KoKo. Nick is preceded in death by his parents and one brother, Angelo. A walkthrough visitation will be held from 9:30-1030 A.M. Saturday January 9, 2020 at Burke-Tubbs Funeral Home in Freeport. A private family service will follow. Social distancing and face masks will be required. Burial will be in White Oak Cemetery in Forreston, IL. A memorial has been established in his memory. A celebration of life will be scheduled at a later date.

The family of Nicholas J. Losco created this Life Tributes page to make it easy to share your memories.

Send flowers to the Losco family.