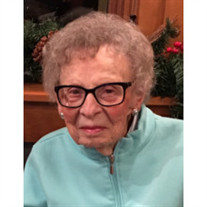 Ruth Esther Drake, age 90, passed away peacefully on February 4th, 2020 at Liberty Village Manor Court in Freeport, Illinois after a full and happy life. She was born on the family farm in Ogle County, Illinois on April 7, 1929 to Esther (Link) Drake and Alfred Henry Drake. Ruth graduated from Forreston High School in 1947, Cornell College in 1951 and received her Master's Degree from Rockford College. She was a band and music teacher for 30 years at Polo Junior and Senior High Schools before retiring in 1984. Ruth was also very involved in Antique Doll Collecting. She was a member of the ILL/WIS Antique Doll Club and served as the Regional Director (Region 10) of the United Federation of Doll Clubs for several years. In her free time, Ruth loved teaching her nieces and nephews and great nieces and nephews about music. She assisted them with lessons and concerts, and also helped with many of their 4H projects. Ruth was an active board member of the Freeport, IL Community Concert Association for many years. Dolls and music were her passion. Ruth was also very active in her faith and was a 73 year member of the First United Methodist Church, Forreston. During that time, she was the choir director for 45 years. She also really enjoyed being a member of the United Methodist Women and was the President of the Rockford District UMW for several years. After Ruth's retirement from teaching, she enjoyed many wonderful trips to Hawaii, Alaska, Europe, Canada and the New England States with her sister Naomi and many friends. Another one of Ruth's passions was her flower garden. Her gazebo, pond and flowers filled her entire backyard, which was featured on a few community garden walks. Ruth was preceded in death by her parents and her brother in law, Robert Lewis. She leaves behind her sister of 86 years, Naomi Lewis. She was also a 2nd mother to nieces and nephews, Kathy Plecki (Robert), Champaign, IL; Kim Kemp (Michael), Phoenix, AZ; Kent Lewis (Christie), Forreston, IL and Karl Lewis (Kristen), Cary, IL. Ruth will also be missed by grand nieces and nephews, Sarah Clasey (Tyler); Dan Plecki (fiancé Kelsey), Mike Plecki, Max Kemp, Miles Kemp, Marnie Kemp, Dylan Lewis, Sophie Lewis, Jonathon Lewis, Andrew Lewis and one loving great niece Allyson Clasey. Ruth also leaves behind 2nd cousin and close friend, Kenneth Drake and many wonderful and caring neighbors and friends. Ruth's visitation and funeral will be held on Saturday February 15th, 2020 at the First United Methodist Church in Forreston. A short visitation from 10:00am to the time of the service will precede the funeral service, which will begin at 11:00am, followed by burial at Chapel Hill Memorial Gardens. The family would like to thank the caring nurses, CNA's and hospice staff at FHN and Liberty Village Manor Court for the comfort provided and support for Ruth and her family. In lieu of flowers, memorials may be made to the First United Methodist Church 402 1st Ave, Forreston, IL 61030 in honor of Ruth's service and wishes. Please sign Ruth's guestbook at www.burketubbs.com

Ruth Esther Drake, age 90, passed away peacefully on February 4th, 2020 at Liberty Village Manor Court in Freeport, Illinois after a full and happy life. She was born on the family farm in Ogle County, Illinois on April 7, 1929 to Esther (Link)... View Obituary & Service Information

The family of Ruth Esther Drake created this Life Tributes page to make it easy to share your memories.

Send flowers to the Drake family.