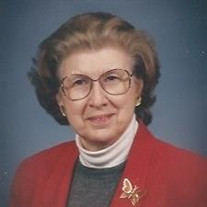 Ruth Olive Inman, 100, passed away Thursday, December 30, 2021 at The Wellshire in Morton Grove, IL. Ruth was born to Irvin and Clara (Groezinger) Inman on September 8, 1921 in Lena, IL. She grew up in Lena and spent summers on her grandparents’ nearby farm. One year, while in grade school, she and her sister lived on the farm and attended the one room country schoolhouse. Ruth graduated from Lena High School in 1939 and moved to Freeport to attend Brown’s College of Commerce. One year later when the position of secretary to the President at Bankers Mutual needed to be immediately filled, Ruth was hired. She was just shy of 19 years old and that first job became her lifetime career and passion. When Ruth retired 53 years later, she held the position of Vice President of Compliance & Assistant Actuary. Ruth was a longtime member of First Lutheran Church of Freeport, where she was active in many groups, including Book Club, Bible Study, Circle, & The Kate Boggers. She volunteered at her church and in other community programs, including the Literacy Program at Highland College and as a member of the Board of Directors at Parkview Home. Ruth always had other’s needs near the front of her mind and spent much of her free time caring for elders, family and friends. Ruth enjoyed reading, knitting, sewing & tailoring. She inherited a love of gardening from her Grandmother Inman. Ruth especially enjoyed entertaining family & friends, groups small and very large. She often was involved in helping to organize her high school class reunions, including their 70-year reunion in 2009. After retiring she traveled throughout the United States and Europe with her sister and close friend Marge. Surviving is her niece Julie (Lee Kanne) Molter of Skokie, IL; and two cousins, Darla Hasselman of Pearl City, IL and Cynthia Boeke of New Lisbon, WI. Preceding Ruth in death are her parents, her sister Margery Molter, and several close uncles, aunts and cousins. Funeral services will be 1:00 P.M. Saturday January 8, 2022, at First Lutheran Church in Freeport, IL. A visitation will be held from 11:00 A.M. until the time of service. Burial will be in Chapel Hill Memorial Gardens. In lieu of flowers memorials can be directed to First Lutheran Church of Freeport, Lutheran Social Services of Illinois, or a charity of your choice in her memory.

Ruth Olive Inman, 100, passed away Thursday, December 30, 2021 at The Wellshire in Morton Grove, IL. Ruth was born to Irvin and Clara (Groezinger) Inman on September 8, 1921 in Lena, IL. She grew up in Lena and spent summers on her grandparents&#8217;... View Obituary & Service Information

The family of Ruth Olive Inman created this Life Tributes page to make it easy to share your memories.

Send flowers to the Inman family.