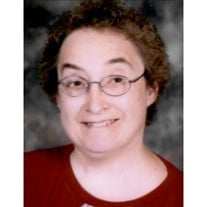 Ruth M. Scovill, 66, of Freeport, passed away February 20, 2021 after a short illness. Ruth was born in Freeport, IL August 16, 1954 to Wilbur V. Scovill and Lauretta (Euler) Scovill. Ruth lived her entire life in Freeport, was educated in the school system, and worked at Malcolm Eaton Enterprises since 1969. She greatly enjoyed her time spent there. She was a member of Park Hills E.F.C. and Sunday School since 1968. Ruth is survived by one aunt, Virginia Kissinger of Park City, KS; and cousin's Martha Carson, Nancy Vorwald, Clark Halstead, Vickie Bennett, Judy Aldrich, Sam Balsiger, and Paul Euler Jr., as well as extended family and many friends. She was preceded in death by her parents, Wilbur and Lauretta; paternal grandparents, James and Emma Scovill; maternal grandparents, Edward and Laura Euler; as well as aunts, uncles, and cousins. Ruth enjoyed doing things for people, especially sending birthday and get well cards. Her favorite past times were doing latch look and coloring. She also enjoyed calling Nancy and Martha almost daily to say hello and give the summary of her day. Her daily phone calls will be missed. Funeral services will be held Saturday February 27, 2021 at 10:30 A.M. at Park Hills E.F.C in Freeport. Visitation will be from 4-7:00 P.M. Friday at Burke-Tubbs Funeral Home in Freeport. Masks and social distancing will be required for both the visitation and funeral services. Burial will be in Ellis Cemetery, rural Freeport. In lieu of flowers a memorial has been established for Malcom Eaton and Ridge Terrace in her memory.

The family of Ruth M. Scovill created this Life Tributes page to make it easy to share your memories.