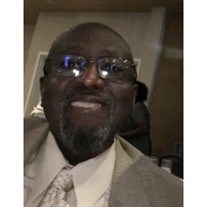 Alvin Phillip Portis Sr. was born on May 12, 1947 in Claiborne, Alabama. He was one of seven children born to Alfred Portis Sr. and Hattie Marie Portis. Alvin married Karen Anitra McGee on June 14, 1975. From this union, Alvin Phillip Portis, Jr. and Alexander Charles Portis were born. Although born in Alabama, Alvin, his parents and siblings moved to Chicago, Illinois in 1956. Alvin began his collegiate career at the University of Illinois; however he enlisted in the United States Air Force in 1967. He was stationed at March Air Force Base in Riverside, California and was honorably discharged in 1970. After leaving the Air Force, Alvin attended Eastern Illinois University. He graduated from Eastern in 1973 with a Bachelor of Science Degree. He later obtained a Master's Degree in Rehabilitation Services from Northern Illinois University in 2003. Alvin worked for the State of Illinois Department of Rehabilitation Services for 34 years until his retirement in 2009. Alvin transitioned into the presence of his Lord and Savior on September 27, 2018. He was preceded in death by his parents, Alfred Sr. and Hattie Marie, brothers, Alfred, Edmond, Sr., and David Portis, Sr., and sister Rosie Pouncy (William) and in-laws, Frank and Arnetta McGee. Alvin is survived by his loving wife of 43 years, Karen, sons, Alvin, Jr. and Alexander, daughter, Willona, two grandchildren, Kyle and Kayla, and sisters, Hattie Lee & Reverend Mary Walker. Visitation will be held on Friday, October 5, 2018 from 4:00-6:30 PM. Kappa Alpha Psi Fraternity, Inc. Ceremony from 6:30-7:00 PM. (Fraternity Brothers Only). Celebration of Life Service will be held on Saturday, October 6, 2018 at 11:00 AM. All services will be held at St. Paul Church Of God In Christ, 1001 Bishop Washington Avenue, Rockford, IL 61102. A memorial has been established in Alvin P. Portis' memory. Please sign his guestbook and share a memory at www.burketubbs.com

The family of Alvin Phillip Portis Sr. created this Life Tributes page to make it easy to share your memories.