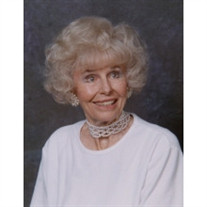 Beth Hanson Alberts August 20, 1920 ~ January 5, 2019 Beth Hanson Alberts, 98, passed away on January 5, 2019, in Freeport, IL. She was born August 20, 1920, in Malad, Idaho, a daughter of Leo Rees and Marie Elizabeth Hanson. Beth moved to Ogden in 1931, graduated from Ogden High School, and attended Weber State College. She was engaged to Raymond Leo Alberts on December 4, 1941. They vowed they would be married June 4, 1942--six months to the day after their engagement. War was declared December 7. People tried to persuade them to wait until after the war to get married, but, true to their promise, they married on June 4 in the Salt Lake City Temple. She worked at several Naval Air Stations while following her husband while he was in the Navy. Upon their return to Ogden, she was employed by Weber State College as a registrar. She eventually became Director of Graduation and Records and oversaw the computer conversion of student records. She grudgingly retired after 27 years of service in order to travel with her husband when he retired. Ray and Beth traveled extensively. Some of their favorite destinations included France, Italy, Spain, Austria, Morocco, Denmark, Holland, Mexico, and Hawaii. She was a member of The Church of Jesus Christ of Latter-day Saints. She served as Relief Society Counselor, Sunday School and Primary Teacher and many other positions. Beth loved to dance and even taught a few classes. She took many classes in oil painting and loved to paint landscapes and floral. She was chairperson for the 1998 Ogden High School reunion and served on committees for the 1999 and 2000 reunions. Beth's family was the highlight of her life. Surviving are two sons, Dr. Raymond L. (Linda) of Freeport IL and L. Scott (Wendy) of Mukilteo WA; three grandchildren, two step-grandchildren, two great-grandchildren, four step-great-grandchildren and one step-great-great-grandchild. She was preceded in death by her husband, her parents, three sisters, three brothers and one grandchild. Services will be held on Monday, January 14, 2019 at 11 a.m. at Lindquist Ogden Mortuary, 3408 Washington Blvd, Ogden, Utah. Interment at Ogden City Cemetery. Local arrangements were entrusted to Burke Tubbs Tubbs Funeral Home. Please sign Mrs. Albert's guestbook at www.burketubbs.com

The family of Beth Hanson Alberts created this Life Tributes page to make it easy to share your memories.

Send flowers to the Alberts family.