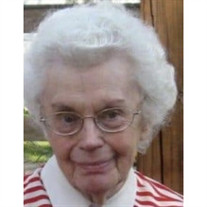 Betty J. Mandt of Freeport, 94, died early Monday, October 15th from complications of a stroke. Until her last illness she lived in her own home with support from home helpers, her daughters, and son. Betty was born February 4, 1924 in Champaign County, Illinois. In June 1949 she married Almer J Mandt, Jr. The couple had five children. Mr. Mandt died in 1993. Betty worked as an accountant for the Air Force and the University of Illinois as a young women, later as a home bookkeeper for several Freeport businesses, and then in partnership with her husband as Mandt Tax and Accounting Service. For a number of years she was business manager for Germania Club and worked in the Stephenson County animal control office. She was an active member of the Freeport VFW Women's Auxiliary, serving in several offices, including legislative chair, and also held that position for VFW District 6 (Northern Illinois). She won several "Best in Illinois" awards for her contributions. Her writing appeared occasionally in the Freeport Journal-Standard, including essays on the importance of reading and libraries, women's contributions to the nation's defense in earlier times, and current issues in Freeport. She was a Freeport Library volunteer for many years, a former member of ABWA, Ladies of the Elks, and was vice president of the PTA at both Lincoln-Douglas and Center Schools. Betty grew up during the depression, and went to work at an early age to help support her family. She later took accounting courses at the University of Illinois. She was an avid reader from early childhood, in later years favoring mysteries and romance novels. As a young mother, she wrote two mystery novels which she never tried to publish. Later, she wrote children's poetry, becoming a "Distinguished Member" of the International Poet's Society. A number of her childrens' teachers used her poetry in class. Daughter of Frank and Myrtle Pepper, she was preceded in death by her parents, husband, brother, Merle Pepper, and great grandson Jayden Roderque. She is survived by her five children, Dr. Almer J. Mandt, III, of Wichita, KS, Sue and Barb Mandt and Deb Keleher of Freeport, and Cathy (Ervin) Berg of Rapid City, S.D.; six grandchildren, Stephanie (Michael) Brashaw, Courtney (Steven) Roderque, and Jenny (Nate) Ray of Freeport, Rachel (Rob) Stella of the Los Angeles area, Justin and Tyler (Aimee) Berg of Portland, OR; and eight great-grandchildren, Alyson and Noah Brashaw, Arielle and Jaleigh Roderque, Aiyden Johnson of Freeport, and Dylan, Justin, and Madison Stella of Los Angeles. Her poem "Candle" published by the National Library of Poetry, ends in a fitting epitaph: Like life you start with flickering glow/Burning steadier as you grow;/'til life's flame sinks out of sight/And God's hand puts out the light. Visitation will be 5:00 p.m. - 7:00 p.m. Thursday October 18, 2018 at Burke Tubbs Funeral Home. Private family services will be held Friday. Burial will be in Oakland Cemetery. A memorial has been established in Betty's memory. Please sign her guestbook and share a memory at www.burketubbs.com

Betty J. Mandt of Freeport, 94, died early Monday, October 15th from complications of a stroke. Until her last illness she lived in her own home with support from home helpers, her daughters, and son. Betty was born February 4, 1924 in Champaign... View Obituary & Service Information

The family of Betty J. Mandt created this Life Tributes page to make it easy to share your memories.

Send flowers to the Mandt family.