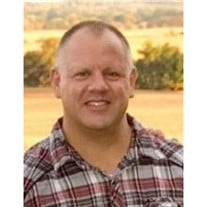 Brian Elwood Haijenga (50) of rural Baileyville died from a snowmobile accident the night of February 11, 2021. Brian was born on August 3, 1970, in Sterling to Darla and Carroll Haijenga. He was the third of four children, the only boy, and spoiled accordingly. Brian was a pipefitter by trade and a welding administrator at the Byron Nuclear Generating Station at the time of his death. Brian was passionate about sports. He played every sport he could at Forreston High School and softball on every field in the area. He rooted for his nieces and nephews often, rarely missing a local game. He was a fan of the Cubs, Bears, Blackhawks, Bulls, Badgers, and more. He made friends easily and kept them forever. He was at his happiest when he was with friends and family on trips to concerts and sporting events, at the river or at his home, which he helped build, at Little Lake Carroll. Brian is survived by and will lovingly missed by stepmother Sherry Haijenga of Freeport and sisters Brenda (Joe) Akins of Forreston, Beth (Scott) Gordon of Bloomington, Barb (Shane) Wells of German Valley and his treasured nieces and nephews, Sarah (Dan) Clark of Forrerston, Adam (Rachel) Akins of Florida, Ella Gordon of Louisville, Harrison Gordon of Bloomington, Julia Wells and Andrew Wells, both of German Valley. He was preceded in death by his parents and grandparents, Harland and Lois Voss and Robert and Ruby Haijenga. A visitation will be held on Tuesday, February 16, 2021 at Burke-Tubbs in Freeport, IL (504 N. Walnut Ave.) from 3-7 p.m. A celebration of life will be held at a later date. In accordance to Brian's wishes, his ashes will be scattered on a baseball field. In lieu of flowers a memorial will fund kids sports and pet adoption.

Brian Elwood Haijenga (50) of rural Baileyville died from a snowmobile accident the night of February 11, 2021. Brian was born on August 3, 1970, in Sterling to Darla and Carroll Haijenga. He was the third of four children, the only boy,... View Obituary & Service Information

The family of Brian Elwood Haijenga created this Life Tributes page to make it easy to share your memories.

Brian Elwood Haijenga (50) of rural Baileyville died from a snowmobile...

Send flowers to the Haijenga family.