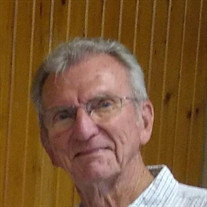 Bruce William Banks of Dakota passed away peacefully Thursday December 2, 2021 at the age of 90 at home with his family. Bruce was born February 3, 1931 in Rockford, the son of Harry and Helen (Melchert) Banks. Bruce was happily married to Jane Marie Sughroue Banks for 64 years, before Jane passed away earlier this year. Together they had 6 children. As a young man, Bruce served his country in the U.S. Armed Forces. He spent nearly four years in the U.S. Army including a stint in Korea where he received a Purple Heart after suffering a gunshot wound. He then joined the U.S. Air Force. After returning home, Bruce and Jane were married in 1957, then moved to Mexico City Mexico where Bruce went to school on the GI Bill. After living there for over a year, they moved back to Illinois for a few years, before moving to Texas for three years, back to Illinois briefly, then on to Michigan for a year. They settled in Dakota in 1967 and were there ever since, in a home that Bruce improved greatly . Bruce owned and ran the Credit Bureau of Freeport for many years, with Jane joining him for several years, working together until they retired. Bruce loved his family and friends and kept them entertained with his countless stories. Bruce and Jane saw the country in their RV, enjoyed many visits to their cabin in Conover Wisconsin, and traveled the world. Bruce loved to golf, fish, snowmobile, garden, play cards, do crossword puzzles, read, bowl, and more. Over the past several years, Bruce and Jane enjoyed many ‘Thirsty Thursdays’ at the RCT playing the machines. Bruce was the youngest of his Banks siblings, preceded in death by his parents, four brothers, and one sister. Bruce was also preceded in death by his wife Jane and youngest daughter, Shaney. Doug (Pam) Banks is the oldest of Bruce’s surviving children, followed by Cerena (Shawna) Banks, Laura (Todd) Wise, Valerie (Wayne) Schwarzkopf, and Shelly (Frank) Chaloupka. Bruce had 14 grandchildren, 20 great-grandchildren, and many, many nieces and nephews. At Bruce’s request, there will be no visitation or service. In lieu of flowers, family and friends can say a toast and raise an Old Milwaukee Light in his honor while retelling their favorite ‘Bruce story’.

Bruce William Banks of Dakota passed away peacefully Thursday December 2, 2021 at the age of 90 at home with his family. Bruce was born February 3, 1931 in Rockford, the son of Harry and Helen (Melchert) Banks. Bruce was happily married to... View Obituary & Service Information

The family of Bruce William Banks created this Life Tributes page to make it easy to share your memories.