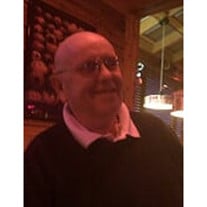 Calvin T. Reed, 77, of Freeport, died Saturday October 17, 2020 at Manor Court after a brief illness. Calvin was born December 3, 1942 in Moline to Leslie and Dorothy (Paxton) Reed. Calvin married the love of his life, Linda (Sager) on July 17, 1965, she passed away in 1995. Calvin worked for Sears, Stover Tank and Barbara Coleman, before working for the Freeport School District for 28 years as a custodian and part time bus driver. He was an avid Chicago Cubs, Bears and Blackhawks fan. He loved spending time with his family, going camping, and traveling. He liked to go for rides with his family and friends and exploring the area and finding new places to visit. Calvin and his wife loved to collect department 56 Snow Village. After his wife died, he began going to Gaither and other Southern Gospel concerts all over the United States. Calvin was a member of Laurel Street Community Church in Freeport. Surviving are his two sons, Michael (Karen) Reed of Lanark and Daniel Reed of Freeport; sister, Charlotte Nickerson of Virginia Beach, VA.; two grandchildren, Robert (Becky) Luther and Rachel Luther all of Lanark; and two great-grandchildren, Braydon and Gavin Luther both of Lanark. Calvin was preceded in death by his parents, wife, infant son, Steve Reed, sister, Sandra Nugent; and brothers, Donald and Richard Reed. Funeral services will be 11:00 a.m. Thursday October 22, 2200 at Burke Tubs Funeral Home. Reverend Dennis Jarrard of Laurel Street Community Church and Pastor Ellis Boughton of Yellow Creek Church of the Brethren presiding. Visitation will be 4:00 p.m. - 7:00 p.m. Wednesday October 21, 2020 also at Burke Tubbs. Burial will be in Chapel Hill Memorial Gardens. In lieu of Flowers a memorial has been established in his memory. Please sign his guestbook and share a memory at www.burketubbs.com

The family of Calvin T. Reed created this Life Tributes page to make it easy to share your memories.

Send flowers to the Reed family.