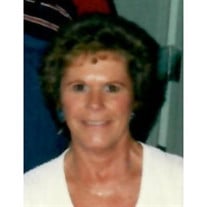 Carol Ann Dinderman, 77, of Freeport, IL passed away Tuesday August 4, 2020 at Liberty Village Garden Court. She was born April 15, 1943 in Freeport to Jacob and Ethel (Gantz) Nieman. As a child, Carol worked on her family's farm where she learned the meaning of hard work and dedication, which she would later prove during her career. She spent her time as a housewife and mother while her children were young. Her love for cooking and for her family would later lead her to become a cook for her Aunt and Uncle at Boland's Back Door. From there, she made the decision to take her love for cooking to a whole new level. On December 5, 1986 she opened the Beltline Café & Catering in Freeport, which she proudly owned and operated for 29 years until her family took over. You could always find her in the kitchen cooking homemade dinner specials, soup and pies for the many customers that passed through her doors. The restaurant was her dream and she was able to make it a reality. In her spare time, you could find her visiting with friends and family. She loved being in the sun, and taking long walks with her dog, Sadie. Another love of hers was her collection of Terry Redlin Prints, Plates and Tins. She made many trips to South Dakota visiting the Terry Redlin Art Museum. Her love for his artwork could be found throughout the entire restaurant. She is survived by her daughter, Deborah (Michael) Donselman of Freeport; son, Jeffrey (Stephanie) Dinderman of German Valley; five grandchildren, Ryan (Ashley) Daves, Tyler Daves, Jordan (Tanner Schoch) Daves all of Freeport, Joshua Dinderman (Nykki Mulder), and Samantha (Josh Garrett) Dinderman both of German Valley; two great-grandchildren, Arianna Daves and Audrie Daves both of Freeport. Also surviving are many nieces, nephews and cousins. She is preceded in death by her parents, brother, Robert Nieman; sister-in-law, Dixie Nieman and her dog, Sadie. Funeral services will be 11:00 a.m. Wednesday August 12, 2020 at Burke Tubbs Funeral Home. Visitation is 4:00 p.m. - 8:00 p.m. Tuesday August 11, 2020 also at Burke Tubbs. Burial will be in Chapel Hill Memorial Gardens. A memorial has been established in Carol's memory. Please sign her guestbook and share a memory at www.burketubbs.com

Carol Ann Dinderman, 77, of Freeport, IL passed away Tuesday August 4, 2020 at Liberty Village Garden Court. She was born April 15, 1943 in Freeport to Jacob and Ethel (Gantz) Nieman. As a child, Carol worked on her family's farm where she... View Obituary & Service Information

The family of Carol A. Dinderman created this Life Tributes page to make it easy to share your memories.

Send flowers to the Dinderman family.