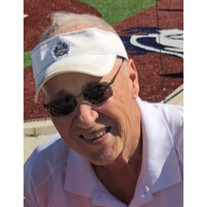 Charles Harold Born passed away on Friday, February 21st at FHN Hospital in Freeport, IL after a long and courageous battle with cancer. He was born November 15, 1947, the son of Harold W. Born and May Barbara Kozel in Highland Park, IL. He graduated from Freeport High School in 1965 and from Southern Methodist University in 1969. He also received his Masters from Northern Illinois University. He married the love of his life, Honora Ann Strang on April, 24th, 1976.Charles was an independent agent and financial advisor for New York Life for 47 years and he always treated his clients as though they were members of his own family. He took great pride in being able to help them through difficult times and believed strongly in the products and services he provided. He was a tried and true fan of the San Francisco Giants, San Francisco 49ers and the Iowa Hawkeyes. From a young age, he would stay up late to try and listen to games on his AM radio - a habit that he continued his whole life. His favorite players were Willie Mays (the reason he always wore 24 as his jersey number) and Joe Montana. He believed strongly in not being a "fair weather" fan and cheered for his teams no matter what. Growing up he played many sports formally and informally, especially baseball and golf. He continued his love of sports, competition and fitness his whole life and believed strongly in the benefits of participating in sports for all children. He won the Park Hills Golf Club championship in 1972 and 1973 and continued to play golf for more than 50 years. He picked up racquet sports and hand ball as an adult and enjoyed both tremendously. He was a life long card player especially pinnacle, bridge and cribbage. Aside from his family, his true passion was playing, officiating and coaching fast pitch softball. He played men's fast pitch throughout the 70's and 80's and attended nationals as a player and player-coach twice. He coached many little league and summer travel teams, as well as at Forreston High School, Le-Win High School and Highland College. He achieved great success as a coach - logging more than 1,000 total wins as a coach over his 30 years and many championships. He felt incredible loyalty to his players and mentored hundreds of kids and young adults over the years. He loved to keep in touch with his former players and took great joy in their continued success on and off the field. He is survived by his wife Ann, son Clinton (Nicole) Born and daughter Alli (Mike) Ingman as well as granddaughter, Zoe Born and grandson Crosby Ingman - he was a wonderful husband, an amazing father and the proudest Pop-Pop ever. His grandkids brought him endless joy. He was preceded in death by his parents, his sister Barbara and his brother Richard. Visitation for friends and family will be Tuesday Febraury 25, 2020 from 3-6 pm at Burke-Tubbs Funeral Home with a Celebration of Life party afterwards at Benchwarmers in Freeport, IL where we will toast Charles. A family funeral service will take place on Wednesday. In lieu of flowers, memorial contributions can be directed to the Highland Community College Foundation Athletics Fund https://highland.thankyou4caring.org/donate or the Holden Comprehensive Cancer Center at the University of Iowa, in honor of Dr. Yousef Zakharia www.givetoiowa.org. Please visit Mr. Born's guestbook at www.burketubbs.com

Charles Harold Born passed away on Friday, February 21st at FHN Hospital in Freeport, IL after a long and courageous battle with cancer. He was born November 15, 1947, the son of Harold W. Born and May Barbara Kozel in Highland Park, IL. He... View Obituary & Service Information

The family of Charles H. Born created this Life Tributes page to make it easy to share your memories.

Send flowers to the Born family.