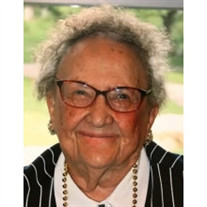 Clara Elizabeth Haeflinger, 94, formerly of Foley, AL, passed away peacefully on Monday, 01 March 2021, at Ascension Living Saint Joseph Village, Freeport, IL. Burke-Tubbs Funeral Home in Freeport is coordinating burial arrangements which will be at Abraham Lincoln National Cemetery in Elwood, IL. Due to COVID restrictions there will be no visitation or church service at this time. Clara's children will host a grave site remembrance service for her and her late husband Edward at the cemetery on a later date. Clara was born 22 November 1926 in Chicago, IL to Sylvester and Clara Kujawa. As an only child, she grew up in the Bridgeport neighborhood of Chicago covered by the love and affection of her parents. She enjoyed her youth with her many cousins living close by and being the youngest of the group was given the pet name, "Babe", which stayed her entire life. Clara met Edward "her sunshine" while in high school. Edward "Moe" enlisted in the Army Air Corp. while still in high school and served his country in WW 2. They were united in marriage on 07 June 1947. Babe and Moe shared almost 71 years of marriage with his passing in April 2018. Their marriage produced five children - Paul, Christine, Nancy, Richard, and Brian. Married life started in Bridgeport, IL with subsequent moves throughout Illinois. Family life centered on school, scouting and church activities along with the myriad of kids' sporting endeavors. Family vacations were camping adventures, coast to coast, in a pop-up trailer. Many happy memories were made during those times. Becoming "empty nesters" in the late 1980's, Clara and Ed decided to retire to the Gulf Shores area of Alabama, settling in Foley, AL. Clara and Ed enjoyed 30 years of southern living making many good friends in their Wolf Bay neighborhood. Clara was an amazing cook and master gardener, taught by her mother. Roses were her specialty and holiday meals were feasts fit for a king. In early 2018, Clara and Ed moved to Freeport, IL to be closer to their children as health issues became more serious. Those left to honor Clara's memory include son Paul and his wife April (Winnebago, IL); daughter Christine and her husband Mike (Bettendorf, IA); daughter Nancy and her husband Pepper (De Pere, WI); son Richard and his wife Sue (Harvard, IL); and son Brian and his wife Kelly (Murfreesboro, TN). Grandchildren include Randall, Amanda, Jon, Diann, Shane, Christina, Daniel, Alexa, Katlyn, and Erin. Great grandchildren include Adaline, Kingston, Wren and Denver. Clara was preceded in death by her husband, Edward, and great grandchild, Caleb Ivy Mercer. Memorials may be made to St. Margaret of Scotland Catholic Church in Foley, AL, St. Jude Children's Hospital of Memphis, TN, or Shriners Hospitals for Children in Chicago, IL.

The family of Clara Elizabeth Haeflinger created this Life Tributes page to make it easy to share your memories.

Send flowers to the Haeflinger family.