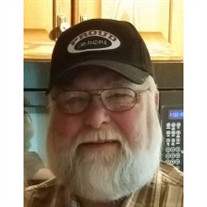 Daniel Allen Carey, 65, of Freeport, died Tuesday April 17, 2018 at University of Wisconsin Hospital, Madison, WI. He was born June 27, 1952 in Freeport, IL, the son of John and Ida (Thompson) Carey. Daniel married Nancy Martz April 23, 1983 in Freeport, IL. He was in US Army Reserves. Daniel worked for the Stephenson County Sheriff's Department from 1975-2002. He was a member of Freeport Eagles Club 679. He was an avid Chicago Bears and Cubs fan. He enjoyed cooking and being with his grandchildren, which were his pride and joy. Daniel is survived by his wife, Nancy Carey of Freeport, IL; three sons, John Carey, Ken (Jen) Carey, and Nick (Megen) Carey all of Freeport, IL; daughter, Danna (Brandon Smith) of Freeport, IL; Brother, Colin (Dianna) Carey; sister Elizabeth "Libby" (Terry) Cabot; mother-in-law, Ruth Martz; and three grandchildren Brantley Smith, Abby Carey, and Adrianna (Rhett) Skeel; and one grandchild and one great-granddaughter on the way. He was preceded in death by his parents; brother, Pat Carey; and father-in-law, Richard Martz. Funeral services will 3:00 P.M. Sunday April 22, 2018 at Burke-Tubbs Funeral Home in Freeport with Rev. John Hollis officiating. Visitation will be from noon until the time of service. A memorial has been established in his memory. Please visit www.burketubbs.com to sign Daniel's online guestbook and to share memories.

The family of Daniel A. Carey created this Life Tributes page to make it easy to share your memories.

Send flowers to the Carey family.