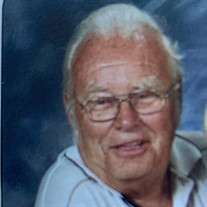 David J. Brandt, 86, of Freeport, IL passed away on Wednesday, September 22, 2021 at FHN Hospital with June, his wife by his side. He was born March 31, 1935 in Freeport, IL to John & Marjorie (Knauf) Brandt. David's father, John 41,sister Sharon 11,and brother James 8 died in a tragic boat accident on the Rock River August 21,1951. In 1953 David graduated from Freeport High School.Dave volunteered for the Army from 1956-1958 & was stationed in California. He married June Beyer on June 13, 1959 at Salem United Church of Christ in Lena, Illinois. His employment consisted of the City of Freeport, Volkens-Culligan, Millers Vending Machines & Commonwealth Edison. Dave was an avid Bears, Bulls and Cubs fan. He was ecstatic that the Cubs won a championship is his lifetime!! Dave was extremely well read on the Civil War, US Presidents & history of the World Wars. Dave and June traveled all over the United States and spent their 25th wedding anniversary in Hawaii. They also enjoyed camping at their trailer every week-end for many years during the summer. After their retirement, they were snowbirds in their Florida home in Kissimmee for 14 years. Surviving is his wife of 62 years, June, daughter Brenda (Casey) Myers of Freeport,Ill; three grandchildren, Trak, of Phoenix Arizona, Brodie of Phoenix, Arizona & Abby Myers-Dehbash of Freeport, IL; and one great grandchild, Yasmine Dehbash. He is preceded in death by his parents, John & Marjorie, sister Sharon and brother James. Funeral services will be 1:00 pm Tuesday, September 28,2021 at Burke-Tubbs Funeral Home- Freeport with Pastor Keith Johnson officiating. A visitation will be held from 11:00a.m. until time of service. Entombment will be in Oakland Cemetery & Mausoleum. In lieu of flowers, a memorial can be directed to the American Kidney Fund (KidneyFund.org/mygift) Dave's family thanks the staff at Davita Driftwood Dialysis Center and FHN's 4th floor staff and Dr. Miller for their compassionate care.

The family of David J. Brandt created this Life Tributes page to make it easy to share your memories.

Send flowers to the Brandt family.