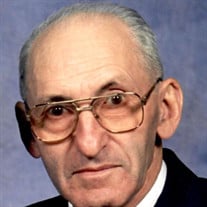 DELBERT LEROY FOAT, 96 FREEPORT - Stephenson County, Illinois, is 565 square miles, and we’re fairly certain that Delbert Foat farmed, assessed or knew someone in nearly every part of it. Delbert Leroy Foat, who called northwestern Illinois home for almost his entire life, died Thursday, November 11, 2021, just one day before his 97th birthday. He was born November 12, 1924, in Gotham, Wisconsin, the son of James and Vera (Schliem) Foat. By age seven, he was milking cows twice a day, and most of his childhood memories related either to helping his folks farm or surprisingly specific information about the weather (he would likely note here that the summer of 1936 saw high temperatures of 116 degrees, but there was still a good corn crop that fall). He attended Crossroads rural schools and graduated from Warren High School in 1942. Delbert married Evelyn Baysinger, the love of his life and the world’s best angel food cake maker, on November 21, 1947. Together they raised three wonderful children and countless cows, hogs, chickens and bales of hay during their 43 years of farming. Delbert served his community as a board member for Pearl City Schools, a dedicated church congregant and as a property tax assessor for 20 years. When Delbert and Evelyn retired, they lived in Orangeville, where they were members of the Orangeville United Methodist Church. In 1999, they moved to Freeport to be closer to family. After Evelyn’s passing in 2014, Delbert learned to cook, perfecting his own special apricot bread recipe, wore out at least one exercise bike, kept a sizeable vegetable garden until the darn deer ate all his beans, played Euchre and chicken tracks with friends and family, and was still driving his John Deere lawn mower until two weeks before his passing. He wanted to be remembered as a good farmer, and indeed his hard work and clean living is an example to us all of a life well-lived. He is survived by his two sons, Galen (Carolyn) Foat of Webb City, Missouri, and Merlyn (Linda) Foat of Freeport; one daughter, Susan (Damon) Hernandez of Mesquite, Texas. Also surviving are 10 grandchildren and 10 (soon to be 11) great-grandchildren. He was preceded in death by his wife Evelyn, his brothers Duane and Darrell and sister Darlene. Memorial services will be 2 p.m. Sunday, November 21, 2021, at Orangeville United Methodist Church. Visitation will be from 1 p.m. until the time of service at the church. In lieu of flowers, please consider a donation to Orangeville United Methodist Church’s Memorial Fund.

The family of Delbert L. Foat created this Life Tributes page to make it easy to share your memories.

Send flowers to the Foat family.